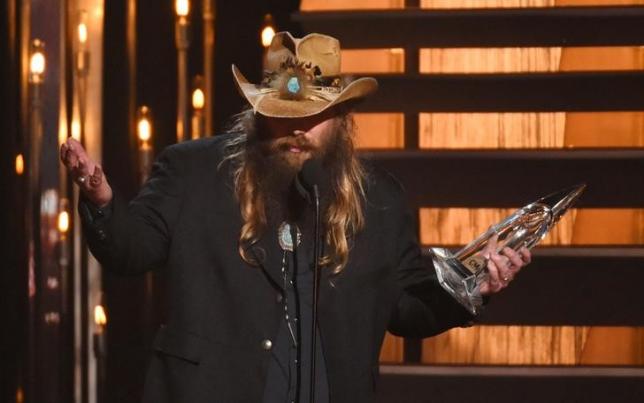 LOS ANGELES - Country singer Chris Stapleton soared straight to the top of the weekly US Billboard 200 album chart on Monday after sweeping the Country Music Awards last week with three wins and a lively performance with Justin Timberlake. "Traveller," Stapleton's debut album that was released in May this year, sold 153,000 albums, 218,000 songs and was streamed nearly 3 million times in the past week, totaling 177,000 units according to figures from Nielsen SoundScan. It caps a breakthrough year for Stapleton, 37, who won album, male vocalist and new artist of the year at the Country Music Awards. His song "Tennessee Whiskey," which he performed with Timberlake at the televised awards show, landed at No. 2 on this week's Billboard Digital Songs chart with 131,000 downloads. The awards show also boosted albums by country artists Carrie Underwood, whose "Storyteller" record remained steady at No. 2 this week with 81,000 units sold, while Eric Church's latest, "Mr. Misunderstood," debuted at No. 3 with 76,000 units. The Billboard 200 chart tallies units from album sales, song sales (10 songs equal one album) and streaming activity (1,500 streams equal one album). Other new entries this week included "Now 56," the latest installment of the "Now That's What I Call Music" compilation featuring artists The Weeknd and Taylor Swift, at No. 4. Another compilation, "We Love Disney" featuring classic Disney songs covered by artists like Ariana Grande, debuted at No. 8., while the new self-titled album from veteran rockers Def Leppard rounded out the top ten. On the Digital Songs chart, which measures online song downloads, Adele's power ballad "Hello" held steady at the top with another 635,000 copies sold. Her much anticipated album, "25," will be released later this month. -Reuters