City of sea braces for a sea of people

KARACHI (92 News) – In a show force, Pak Sarzameen Party (PSP) is finalizing arrangements for party’s first rally in Karachi. An 80-foot wide and 18-foot high stage is being erected at Bagh-e-Jinnah along Quaid-e-Azam’s mausoleum. 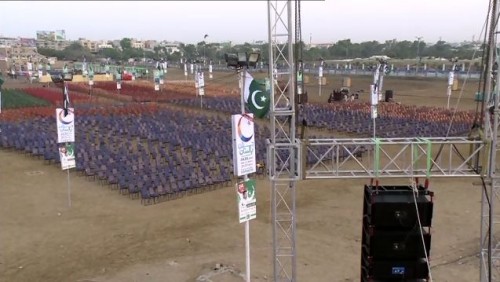 Thousands of chairs have been placed at the rally venue, with sound system installed for a festivity on eve of the public meeting. Former Karachi mayor and Pak Sarzameen Party (PSP) Syed Mustafa Kamal, along with other PSP leaders, will address the rally.

NIAMEY, Niger (92 News) – In a resolution adopted unanimously by the 47th Session of the Organization of Islamic Count

ISLAMABAD (92 News) – Prime Minister Imran Khan has said that he was not selected, but PPP co-chairman Asif Zardari an

Eight killed in firing during Jirga in Swabi

SWABI (92 News) – Eight people were killed during firing in a jirga in Chota Lahore, Swabi on Saturday.

Nawaz Sharif hasn't come to bury his mother, how will he come on govt order: Ijaz Shah

PDM workers flout law, clash with police ahead of meeting in Multan

MULTAN (92 News) – Workers of the Pakistan Democratic Movement (PDM) flouted the law, attacked and clashed with the po