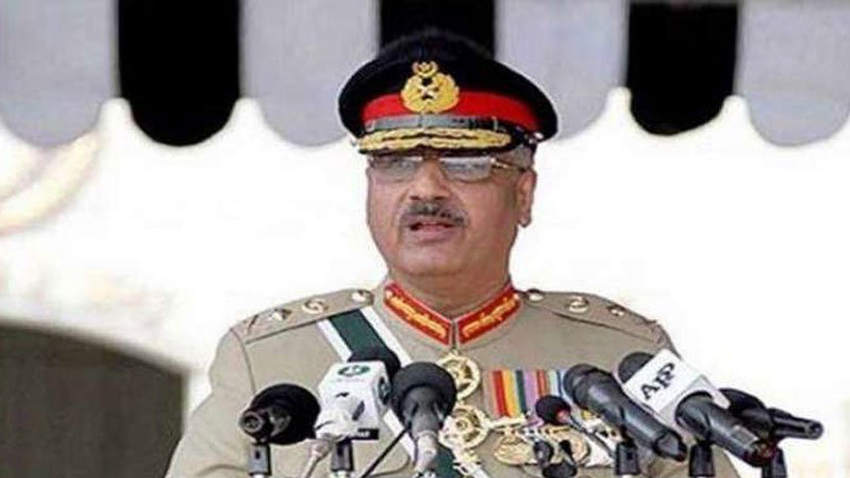 RISALPUR (92 News) – Chairman Joint Chiefs of Staff Committee (CJCSC) General Zubair Mahmood Hayat has said that Kashmir’s love is in their blood. Addressing the passing out parade of PAF cadets at Asghar Khan Academy in Risalpur on Thursday, he said that those playing with fire would themselves burn. “Our wish for peace should not be considered our weakness. We will fight to the last drop of our blood,” he said. General Zubair Mahmood Hayat said that Pakistan's armed forces are fully capable, prepared and motivated to respond against the entire spectrum of threats. “Kashmir is an incomplete agenda and it should be resolved according to the United Nations resolutions,” he said. “There can be no lasting peace in South Asia without the just settlement of Kashmir dispute. Pakistan rejects forceful annexation of Occupied Kashmir by India. This is illegal and not acceptable to Kashmiris or Pakistan.” Strongly condemning the blatant human rights violations in Occupied Kashmir, he said that the indefinite curfew and lockdown in the held valley is a blot on the human conscience. “Pakistan will continue its moral, diplomatic and political support to their Kashmiri brethern. Kashmir runs in our blood because Kashmir is Pakistan and Pakistan is Kashmir." The Chairman Joint Chiefs of Staff Committee said Pakistan is a responsible nuclear state and has noted the pronouncements from the eastern border indicating possible changes in policy and posture in various aspects of nuclear domain. “Pakistan has kept a close eye on the strategic force development and deployment of the ballistic missile defense.” He said that Pakistan has a credible, potent, reliable and effective strategic capability which will continue to provide full range of real options to the national command authority. “Pakistan's strategic and nuclear programme is fundamental part of our national security construct. Pakistan will continue to maintain strategic balance in South Asia at all costs without indulging in the arms race,” he declared. General Zubair said that the fascist and racist policies of India pose a threat to the region. Lauding the PAF for shooting down the two aircraft of the enemy in the dogfight and arresting one of the pilots, he said that the PAF had once against proved its superiority when it took the enemy by surprise. Referring to Afghanistan, the Chairman Joint Chiefs of Staff Committee said Pakistan has meaningfully contributed to regional peace and stability. He said despite recent events, Pakistan shall continue all-out efforts for the Afghan peace process which leads to an enduring peace and stability in Afghanistan. During the passing out parade, Pakistani jets displayed excellent fly-past. As many as 351 cadets, including 142 GD pilots, passed out. The cadets hailed from several countries, including Saudi Arabia. Chairman Joint Chiefs of Staff Committee (CJCSC) General Zubair Mahmood Hayat, who was the chief guest, awarded medals to the cadets showing the best performance.

ROME (Reuters) A tiara passed down through generations of Italy's royal family will be among the highlights at a Sotheby's auction of jewels in Geneva next week.

PML-N will not allow any conspiracy regarding Kashmir to succeed: Maryam Nawaz

Modi could have visited Pakistan in October 2021: Dr Moeed Pirzada