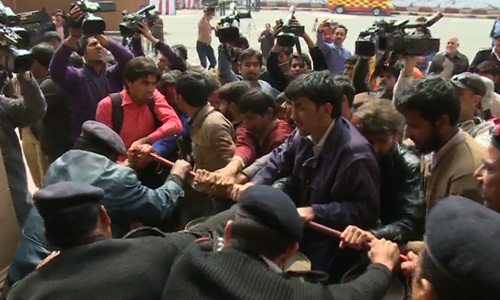 LAHORE (92 News) – Punjab Chief Minister Shahbaz Sharif summoned an emergency meeting to discuss the demands of the blind people protesting in front of the Punjab Assembly on Tuesday. The protesters also tried to barge into the Punjab Assembly. The protesters’ leader said that what will be the benefit of three percent quota if the earlier announced two per cent quota in government jobs was not implemented. “We stayed in the open in the chilly weather and no one gave us anything to eat,” he added. He said that about 7,000 seats are vacant under the two percent quota and they are not being filled. He said that over 50 people are in the sit-in. “The chief minister should give us jobs so that we may return to our homes.” He threatened to block the Mall Road if their demand was not accepted. Punjab Home minister Shuja Khanzada held talks with the protesters. Zaeem Qadri, the Punjab government spokesman, said that the government has increased the quota for the visually-impaired people from two to three percent, while contractual employees are being regularized.