Upon arrival at PLA(N) Headquarters, Beijing, Admiral Zafar Mahmood Abbasi was received by his counterpart Vice-Admiral Shen Jinlong. A smartly turned out contingent of PLA(N) clad in ceremonial dress presented him the Guard of Honour.

Later, Chief of the Naval Staff called on Commander PLA(N), Vice Admiral Shen Jinlong. During the meeting, discussions on professional matters including bilateral naval collaboration and security environment in Indian Ocean Region were held. Various avenues of cooperation between the two Navies were also focused. A comprehensive brief on PLA(N) was given to Admiral Zafar Mahmood Abbasi. 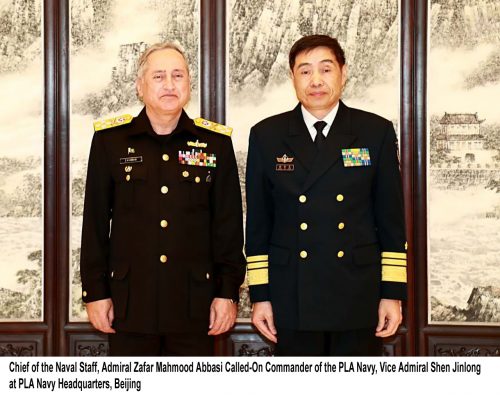 Chief of the Naval Staff, Admiral Zafar Mahmood Abbasi highlighted Pakistan’s commitment and contributions in fight against terrorism including participation of Pakistan Navy in multinational Task Forces against piracy and maritime terrorism. PLA (N) Commander lauded Pakistan Navy’s efforts and focused commitments in support of collaborative maritime security in the region. Vice Admiral Shen Jinlong said that Pakistan Navy is playing a pivotal role for maritime security and stability in the region, which has greatly helped in shaping a secure environment for freedom of navigation in the region.

The visit is expected to greatly augment the bilateral cooperation between both the countries in general and Navies in particular.