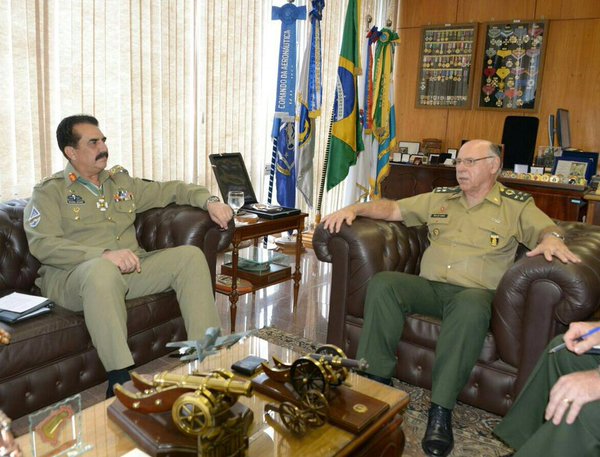 RAWALPINDI (92 News) – Chief of Army Staff General Raheel Sharif has on Tuesday met with the Chief of Joint Staff Brazil Armed Forces General Jose Carlos De Nardi in Brazil. According to a statement issued by the ISPR, the COAS discussed regional security and emerging challenges during the meeting. They further discussed matters of mutual professional interest, military-to-military relations and training exchanges. General Raheel Sharif was presented a Guard of Honor and 19 guns salute when he arrived at Brazil Army Headquarters. On the occasion, army chief gen Raheel Sharif said that vast opportunities are present to enhance cooperation between the two countries, adding that Pakistan wanted to improve bilateral relations with Latin American countries. The Brazilian Chief of Joint Staff hailed Pakistan Army's professionalism and operational achievements especially in ongoing counter terrorism operations, adding that Pakistan is the most important country. Earlier, COAS General Raheel Sharif met the Brazilian Defense Minister and invited him for a tour to Pakistan. In a statement issued by the ISPR, the COAS visited the Brazilian Defense Ministry where he met with the Defense Minister Aldo Rebelo. During the meeting, the COAS discussed matters relating to Pak-Brazilian defense cooperation. The Brazilian defense minister lauded Pakistan’s role in fight against terrorism. He said that they wanted to strengthen Pak-Brazilian relations. Gen Raheel Sharif invited Aldo Rebelo for tour to Pakistan.