According to a press release issued by the ISPR, the COAS was presented the guard of honor at Malaysian Army Headquarters.

He held meeting with his Malaysian counterpart and Defence Forces chief separately. 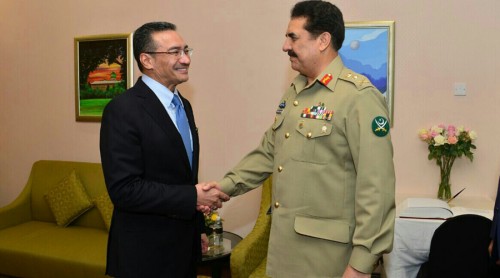 The COAS and Malaysian authorities agreed to enhance defence cooperation.

The Malaysian army chief lauded the Pak Army’s sacrifices in the war against terrorism. He also acknowledged the role of COAS General Raheel Sharif for peace and stability in the region.

The COAS also held a meeting with the Malaysian Defence Minister. They discussed bilateral relations and matters of mutual interest.