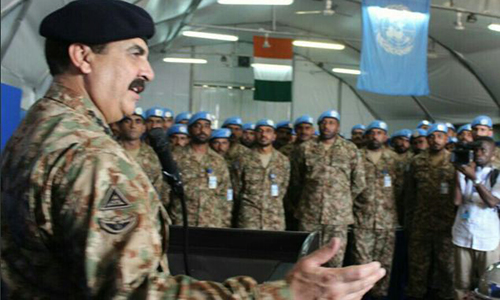 RAWALPINDI (92 News) – Chief of Army Staff General Raheel Sharif on Friday spent a day with Pak Army contingent deployed under the UN flag in Ivory Coast. According to the ISPR, he paid rich tributes to officers and men for professionalism and commitment for bringing stability and promoting peace for a secure world under the UN, acknowledging the sacrifices of Pak troops in peacekeeping operations (PKOs). “Pakistan is committed to meet emerging challenges of PKOs and uphold the UN and Pak flag fluttering high. Pakistan is proud of its historic and current role as major troops’ contributor. It takes it as obligation to participate in international peace and security,” he said. The COAS said that being one of leading troops’ contributors, Pakistan has currently deployed on six UN missions despite ongoing Operation Zarb-e-Azb and Intelligence Based Operations. “Our troops proving their mettle on PKOs also,” he said.