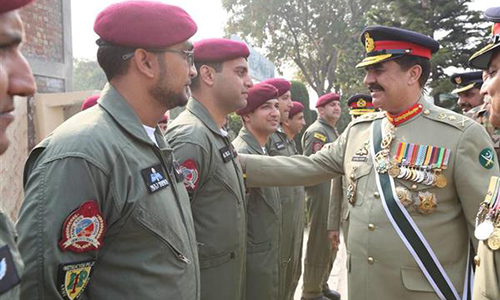 Congratulating the graduating officers, COAS said that modern aviation capabilities are critical to the success of ongoing fight against terrorism, as well as thwarting conventional threats to the motherland.

“There has been tremendous development in Army Aviation and special efforts are made towards further advancement, not only in domain of combat aviation but in other categories as well, including cargo and smaller aircrafts,” he emphasized.

The COAS said that Army Aviation has proved its mettle not only in ongoing operation Zarb-e-Azb but also has been always at the forefront to help the nation during natural calamities in earthquake / flood relief activities. Army’s significant achievements, over past few years, are greatly attributable to the active role of Army Aviation. “The untiring efforts of aviation pilots and their sacrifices deserve highest accolade.”

Earlier on his arrival at Gujranwala, the COAS was received by Commander Central Command Lt-Gen Ikram Ul Haq.