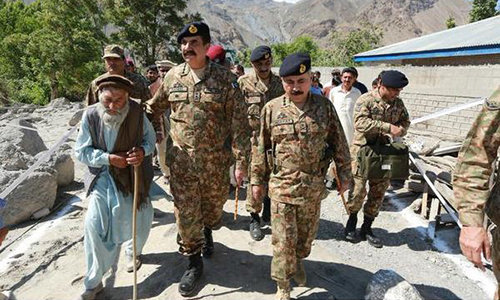 RAWALPINDI (92 News) – Chief of Army Staff General Raheel Sharif visited flood-hit areas in Chitral on Wednesday and directed the officials concerned to continue relief operation till flood recedes. Local military officers briefed the COAS about the floods. He directed the FWO to expedite work for restoration of roads and bridges. The COAS directed the FWO to keep the communication infrastructure of Chitral with rest of the country open. He also lauded the tireless efforts of FWO, FC KPK, Army troops and Army Aviation working round-the-clock in rescue and relief operations. Meanwhile, UK Secretary of State for Defence Michael Fallon visited General Headquarters and called on Chief of Army Staff General Raheel Sharif. During the meeting, matters related to defence and security cooperation and measures to further enhance bilateral defence and training collaboration were discussed. Michael Fallon appreciated Pak Army’s sacrifices during Operation Zarb-e- Azab and efforts for peace and stability in the region. Earlier on his arrival at General Headquarters, a smartly turned out contingent of Pakistan Army presented the guard of honour to the dignitary who laid a floral wreath at Yadgar-e-Shuhada.