The two-week exercise was focused on counter terrorism operations and sharing of field combat experience of three armed forces.

Owing to the successes of Operation Zarb-e-Azb, a large number of friendly countries have requested Pakistan Army to organize training for their troops in the state-of-the-art Counter Terrorism Training Centre. So far Pakistan Army has conducted joint exercises with Saudi Arabia, Bahrain, China and Jordan to enhance their combat efficiency. Pakistani troops have also imparted counter terrorism training to police and other law enforcement agencies of all four provinces, Gilgit Baltistan and Azad Kashmir.

Speaking on the occasion, COAS General Raheel Sharif congratulated all participants of exercise for displaying high-level of professionalism and combat skills. “Such exercises will consolidate our special relationship between three forces and help eliminate terrorism from the region.”

The COAS said that terrorism was a global phenomenon and terrorists have no country, religion or sect. “Pakistan has been victim of terrorism for over a decade and sacrificed a lot, but at the end we have turned the tide primarily due to resilience displayed by the nation and professionalism of the armed forces,” he maintained. 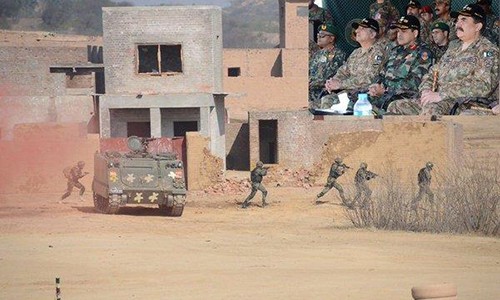 “We are willing to share our experiences with the world for the benefit of humanity and as an obligation towards international peace,” the COAS said. “Pakistan Army has also taken the initiative of providing counter terrorism training to our police personnel and other law enforcement agencies in Pakistan in an effort to enhance their capacity and make them capable of skillfully dealing with this menace in an efficient manner.” 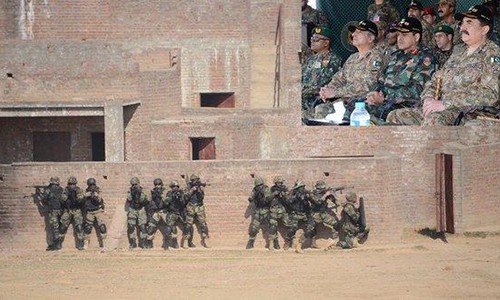 The COAS said that praising the performance and potential of the trainees, such training will enhance the confidence of the law enforcement agencies LEAs. “The foreign military delegates from Afghanistan, Sri Lanka, Maldives and South Africa witnessed the exercise and lauded professionalism of Pakistan Army,” he said.