The COAS was briefed in detail by the formation commander about progress of the ongoing operation Zarb-e-Azb, return of TDPs and development/ resettlement works initiated by Army in the area.

Acknowledging the clearance of 650 square KMs of an uncontrolled area in the final phase so far, the COAS expressed his complete satisfaction over progress of concluding phase of operation in Shawal.

Appreciating these successes, he vowed to continue ops till total elimination of hideouts and curse of terrorism and extremism from across the country. He specially appreciated the intelligence agencies for matching pace of busting sleeper cells in urban centres across the country.

Talking to the troops, the COAS commended all officers and men for their courage, determination and spirit of sacrifice displayed by them in Shawal Operation under harsh weather condition and treacherous terrain. 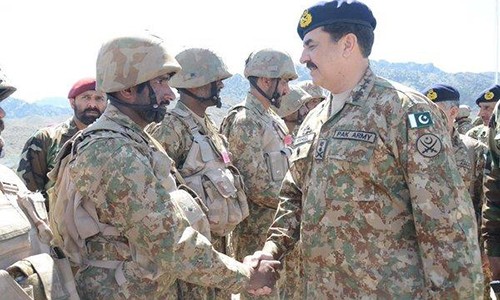 The COAS was also briefed on the ongoing rehabilitation work, and its effects on the socio-economic landscape of the area. Satisfied with the pace of rehabilitation work, he directed all concerned to further boost the pace to meet time lines and ensure a dignified and early return of TDPs to a better built area.

Later, the COAS interacted with tribal elders and recently returned TDPs, and assured them that Army will continue to remain in the area till completion of resettlement process. Tribal elders paid rich tribute to Army for successful operations, and affirmed that with the help of the Army, they will never allow these terrorists to return to their area. 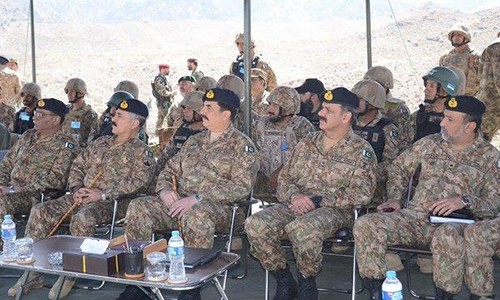 The COAS also laid foundation stone of state-of-the-art Younis Khan Sports Complex at Miranshah for the youth, to be constructed by Army engineers. Renowned cricketer Younis Khan was also present on the occasion, as the Complex has been named after him.

Later, the COAS had a round of under destruction Miranshah Bazar and appreciated Army engineers for their dedicated efforts in executing quality construction work. 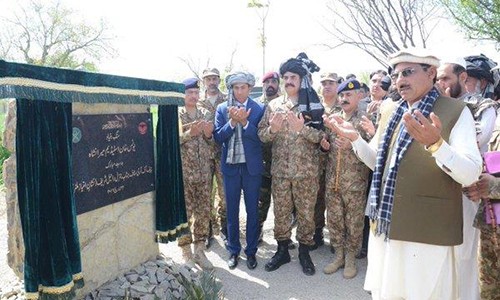 Miranshah Bazar which had been used by the terrorists as their centre of fight and got damaged during the clearance phase of Op Zarb-e-Azb, is being completely rebuilt by the Army to re-initiate economic activity in the area wherein new shops and markets will be handed over to affected local tribes.

Earlier on arrival, the COAS was received by Corps Commander Peshawar Lieutenant General Hidayat Ur Rehman.