(Web Desk / Agencies) –        A Christchurch crowd in the tens of thousands welcomed the 2015 World Cup in a colourful, community-focused event, which was capped off by a spectacular fireworks display. A host of cricket stars, both past and present, were in attendance, as were thousands of families, who had 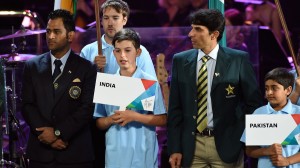 begun arriving at North Hagley Park in the early evening to enjoy the carnival atmosphere. The event, free for the public, began with four big backyard cricket matches for children, each played at themed stations. There was a Caribbean corner, a “So Beige” Kiwiana mini-venue, a South Asian station, and a Victorian-themed match, replete with ladies and gentlemen dressed in fancy garb, and a painting of WG Grace overlooking the scene. 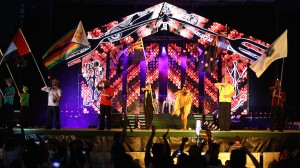 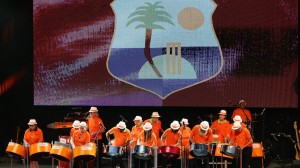 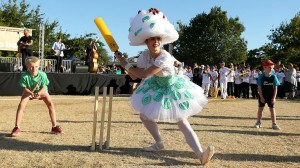 The cricket hubs wound down when the opening ceremony began in earnest with a Kandyan dance performed by a Sri Lankan troupe, followed by a Bollywood-style act, a performance by a bagpiper and an Irish river dance. A Maori cultural group also performed during the evening, apart from several popular New Zealand musical acts, including artistes like Hayley Westenra and Shapeshifter. The crowd grew as the sun set, and gathered around the main stage and the three big screens. Many had brought an evening meal and picnic mats.

Former World Cup players including Chris Harris, Rod Latham and Geoff Allott highlighted the matches that would be played across the six New Zealand venues from atop six towers, before Richard Hadlee and Stephen Fleming also appeared.

Brendon McCullum also played a role in one of the segments that featured a young boy who dreamed of becoming a great cricketer, and enlisted the assistance of Lasith Malinga, Lord of The Rings director Peter Jackson, and several other New Zealand celebrities in his quest. New Zealand prime minister John Key was also at Hagley Park, and posed for a picture with McCullum.

Christchurch mayor Lianne Dalziel gave an impassioned welcome speech, emphasising both the challenges that an earthquake-stricken Christchurch had overcome since 2010, and also the excitement that had built in the city, at the chance to host a major sporting event. In 2011, Rugby World Cup matches that the city had planned to host were cancelled in the wake of the two major earthquakes, but the city will now host the first match of the World Cup on Saturday. “We have been waiting for a very long time for this,” Dalziel said of Christchurch’s yearning to host fans of many nations who have already begun descending on the city. She also said the World Cup would be part of Christchurch’s resurgence in 2015.

All Blacks captain Richie McCaw – a hugely popular figure in the city – and the remainder of the New Zealand cricket team received cheers when their attendance was made visible. One of the biggest fireworks displays ever seen in Christchurch brought the event to a crescendo, as the World Cup was officially declared open.

“We’ve already sold over 825,000 tickets a few days before the first ball is being bowled.

“We’re very close to being at full capacity for Australia v England on Saturday at the MCG. There’s a few thousand tickets left and I’d urge people if they want to be there, to buy now and don’t leave it until the last moment.

“The message to everyone is there are still great tickets available, there’s a lot of games over the tournament and don’t miss out. If you want to be here, if you really want to be part of history make certain you come.” Harnden said.

So there are four games that make up this bumper weekend of World Cup cricket:

The tournament kicks off in New Zealand, with the co-hosts opening match against Sri Lanka at Christchurch completely sold out at the newly launched Hagley Oval in Christhchurch.

The Blackcaps will be looking to repeat their strong Pool form from the 1992 World Cup where they topped the initial stages when they last co-hosted the event.

Later in the day, the Ashes rivals face off at the Melbourne Cricket Ground. Only a few thousand tickets remain for the opening game in Australia. With three days remaining more than 85,000 tickets have been sold putting things on track for the highest crowd ever for an ODI at the ground, which is currently the 1992 World Cup final, when 87,789 people watched Pakistan defeat England.

The capacity for the MCG in World Cup mode is 90,000 due to sight screens, sponsor displays and camera positions that mean thousands of the seats in the ground can’t be used.

Fans are advised to purchase their tickets now to avoid disappointment on the day.

On Sunday, the action heads to Seddon Park in Hamilton where one of the favourites to take out the tournament – South Africa – plays Zimbabwe. Already over 8000 tickets have been sold for the 10,000 capacity ground, with fans no doubt hoping to see more brilliant batting from the Proteas’ AB de Villiers and Hashim Amla who have been in a rich vein of form.

With Zimbabwe impressing in their opening warm-up match against New Zealand and holding a proud record over their African neighbour, this is destined to be a brilliant match.

Again fans are advised to purchase their tickets now in advance to avoid disappointment on the day and be part of this once in a generation event.

Tickets for the much-anticipated clash between traditional rivals India and Pakistan at Adelaide Oval sold out in just 20 minutes when they went on sale last year. The match could be the most-watched game in cricket history and has been eagerly anticipated right across the globe since it was announced.