Upon arrival at the Naval Headquarters, Commander Royal Navy of Oman was received by Chief of the Naval Staff. A smartly turned out contingent of Pakistan Navy clad in ceremonial dress presented him guard of honour. The visiting dignitary was then introduced to Principal Staff Officers.

Later, Commander Royal Navy of Oman called on Chief of the Naval Staff in his office, where discussions on professional matters and bilateral naval collaboration were held.

Various avenues of cooperation between the two Navies were also focused. The CNS highlighted Pakistan’s commitment and performance in fight against terrorism including participation of Pakistan Navy in Coalition Maritime Campaign Plan (CMCP) and Counter Piracy Operations. Numerous tenures of Command of Multinational Task Forces 150 and 151 by senior Pak Navy Officers was also briefed to the visiting dignitary.

A comprehensive brief on Regional Maritime Environment & PN’s Contribution in Regional Maritime Security was also given to the visiting delegation. Commander Royal Navy of Oman highly appreciated role and contributions of Pakistan Navy in maintaining peace and stability in the region.

This visit is expected to greatly augment the bilateral cooperation between both Navies. 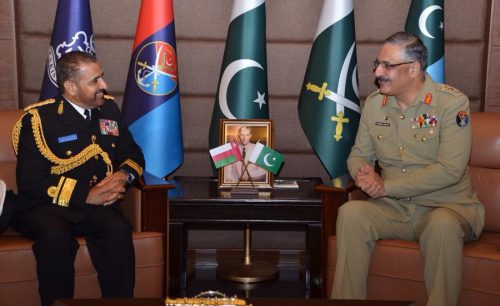 According to a press release issued by the ISPR, matters of mutual interest including geostrategic environment, maritime safety and cooperation were discussed during the meeting.