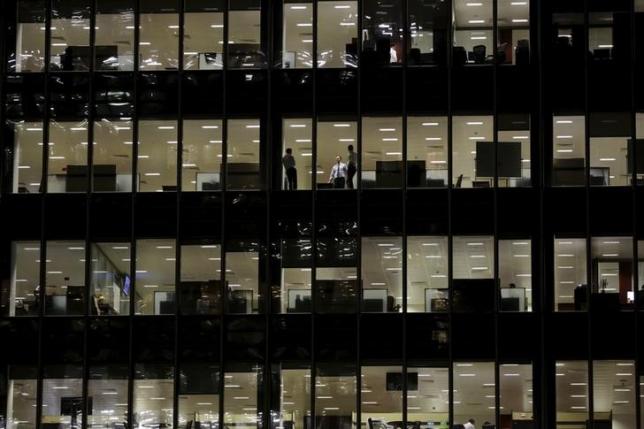 LONDON - The Confederation of British Industry scaled back its forecast for economic growth next year, saying on Monday that resilient domestic demand would not be enough to outweigh the effects of a slowdown in emerging markets. The CBI reduced its 2015 growth forecast to 2.4 percent and its 2016 forecast to 2.6 percent, both 0.2 percentage points lower than its previous forecasts in August, though still a bit better than average for the British economy. "Manufacturers are enduring tougher conditions as a persistently strong pound is hamstringing our export competitiveness," CBI director-general John Cridland said. "But our domestic story is strong and overall we are now in a phase of stable but solid economic growth." Separate figures from Visa Europe, also released on Monday, showed that consumer spending in October grew by 2.1 percent on the year in real terms, its fastest growth in three months. "Looking forward, overall spending looks set to reach higher levels this month, as both online and store-based retailers are preparing to lure customers in with bigger and better Black Friday deals," Visa managing director Kevin Jenkins said. British retailers have increasingly adopted U.S.-style 'Black Friday' discounts in recent years in a bid to kick-start pre-Christmas spending on the day after the United States' late-November Thanksgiving holiday. The CBI will hold its annual conference later on Monday, when Cridland will urge the government to spare spending on business innovation from budget cuts and protect Britain's financial sector from excess European Union regulation. The business group is also focussed on skills shortages as unemployment in Britain falls towards its pre-crisis level. But a quarterly report from a human resources professional body, the Chartered Institute of Personnel and Development, cast doubt on the scale of this problem, saying that skills shortages were confined to just a few sectors. "Wage inflation is unlikely to take off in the next year due to limited skills shortages and subdued pay settlement forecast from employers," the CIPD said. Just 15 percent of job vacancies were proving hard to fill, and employers expected to raise basic pay levels by an average of just 2 percent over the next 12 months, it said. The Bank of England -- which downgraded its own economic growth forecasts last week on the back of weaker overseas demand -- nonetheless forecast wages would rise by around 3.75 percent over the coming year. -Reuters