Confident Kaymer has Georgia on his mind 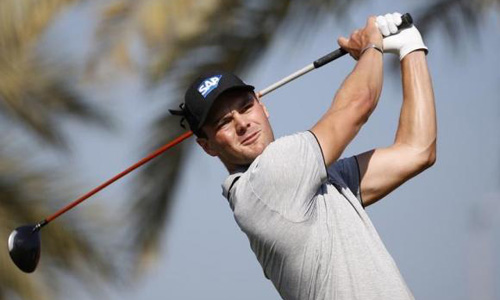 Confident Kaymer has Georgia on his mind

LONDON (Reuters) - Martin Kaymer used to be too deferential towards Augusta National, causing a series of missed cuts, but he now feels much more at home at the U.S. Masters venue and dreams of one day donning the coveted Green Jacket. The German failed to qualify for the weekend on his first four visits to the year's opening major championship held in the state of Georgia. Next month, however, the world number 12 goes into the event with fresh optimism having played all four rounds in 2012, 2013 and 2014 to finish in the middle of the pack in 44th, 35th and 31st position. "It was tough to score worse than I did in my first four years at Augusta," Kaymer told Reuters in a telephone interview. "I just didn't feel comfortable playing the course and I couldn't play it the way it was supposed to be played. "I used to have too much respect for the place, it almost got to the point where I didn't play freely enough. I always held back a little, that is never good in golf, and I've changed that. "It is something that has a lot to do with confidence, knowing how to play the course better, playing with more feel and aggression," added twice major champion Kaymer. "You still have to respect the place of course but that is definitely something I've gained in the last couple of years." The winner of the 2014 U.S. Open and 2010 U.S. PGA Championship has learned to draw the ball from right to left in recent seasons and that is a valuable asset to own at Augusta. DIFFERENT SHAPE "I have become a better player after getting to know there is a different shape of shot needed there," said Kaymer. "Being able to draw the ball helps me play the course the way it should be played. "There were holes at Augusta I used to really struggle on. The 10th for example, the way you have to hit it down into the valley on the left before hitting a seven or eight-iron to the green. "I can play holes like that a bit easier now, put my ball into the same position other players are putting their balls," explained Kaymer who is a golf brand ambassador for Mercedes-Benz, a global partner of the Masters. "The short game has also held me back a little bit in the past so hopefully I can chip and putt a little better this year in order to give myself a chance to compete." Kaymer was competing, and beating, the best of the rest in the middle of 2014. He enjoyed a purple patch of form to win the Players Championship in Florida in May, the tournament dubbed golf's unofficial fifth major, before following up by landing the U.S. Open crown a month later. Although many of his peers say the sport is a case of practice making perfect, the 30-year-old from Duesseldorf believes less is more when it comes to hours spent beating balls on the range. "For me it's important to play rounds of golf more than practising," said Kaymer who holed a nerve-tingling six-foot putt to seal Europe's 'Miracle at Medinah' comeback victory over the U.S. in the 2012 Ryder Cup. "I need to be creative out there on the course, get my feel right and hit the right kind of shots. I'm a feel player. I don't need to be out there on the range six or seven hours a day. "I just need three or four hours before going out to play 18 or 27 holes. That's something I need to do for the next six or seven weeks and then I'll be in the same form as I was last year."