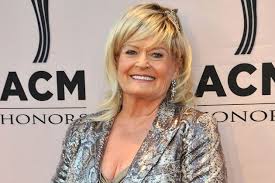 NASHVILLE - Country music singer Lynn Anderson, best known for her 1970 Grammy-winning smash hit "Rose Garden," has died of a heart attack at a hospital in Nashville, her publicist said. She was 67. Anderson, who had recently returned from a trip to Italy, was admitted to Vanderbilt University Medical Center on Thursday for treatment of pneumonia and died later in the day, spokesman Mark Logsdon said. Born in Grand Forks, North Dakota, the daughter of noted songwriters Casey and Liz Anderson was raised in California, where she began her singing career and also developed into a world-champion equestrian. Anderson gained her first success in the 1960s, breaking into the country charts with two of her mother's compositions, "Ride, Ride, Ride" and "If I Kiss You (Will You Go Away)," and following up with the top five hits "Promises, Promises" and "That's a No No." After landing a prime-time spot as a weekly regular on "The Lawrence Welk Show," Anderson moved to Nashville, signed with Columbia Records and recorded the biggest hit of her career, "(I Never Promised You a) Rose Garden," a song written and originally recorded in the 1960s by Joe South. The catchy single topped the country charts, climbed to No. 3 on the pop rankings and earned Anderson a Grammy for best female country vocal. Although Anderson never recaptured the crossover success she attained with "Rose Garden," she went on to chart over a dozen more country tunes through the 1970s, including "How Can I Unlove You," "You're My Man," "Keep Me in Mind" and "What a Man, My Man Is." Eddie Stubbs, Grand Ole Opry announcer and disc jockey for WSM-AM in Nashville, said Anderson's two-year stint as a fixture on "Lawrence Welk" made her a pioneering ambassador for Nashville at a time when country music received relatively little exposure on network television. According to Logsdon, she ultimately sold more than 30 million albums worldwide. She was twice named female vocalist of the year by the Academy of Country Music and earned the same honor from the Country Music Association. Not long before her death, Anderson had released an album titled "Bridges," a collection of gospel songs that included "Drift Away," written by Anderson's longtime partner, Mentor Williams. -Reuters