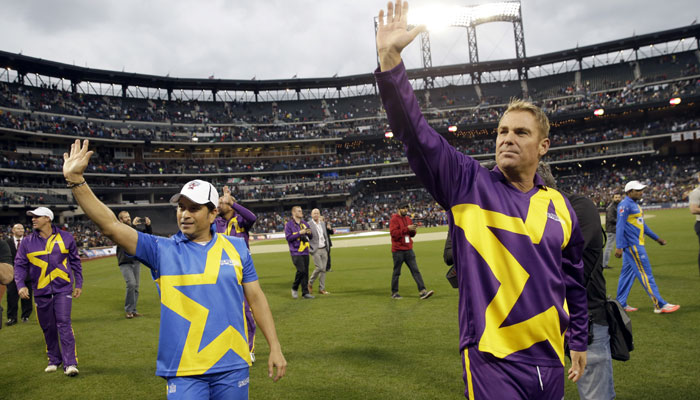 NEW YORK (92 News) – Sachin Tendulkar could not trump Shane Warne's magic as the Indian icon's Blasters went down to the Australian legend's Warriors in the first 'Cricket All Stars' Twenty20 here. Warne’s side chased down the target of 141 with 16 balls to spare. Ricky Ponting (48*) and Kumar Sangakkara (41) put on 80 runs for the 3rd wicket. Earlier, Sachin’s Blasters put on a decent 140/8 riding on Virender Sehwag’s half-century. Sehwag (55) and Sachin Tendulkar (26) put on an opening stand of 85 before Shane Warne removed the Master Blaster. Shane Warne, who was awarded the Man of the Match award, finished with 3 for 20 after getting rid of Brian Lara and VVS Laxman. Daniel Vettori and Andrew Symonds bowling in tandem with Warne ensured that Sachin’s Blasters did not race away to a mammoth total. Although Warne claimed man of the match honors after claiming Tendulkar’s wicket, it was the Indian star whom most of the overwhelming South Asian expatriate crowd had come to see. The cricket itself was almost secondary to the chance for cricket-starved Indians in America to get to experience Tendulkar in person.