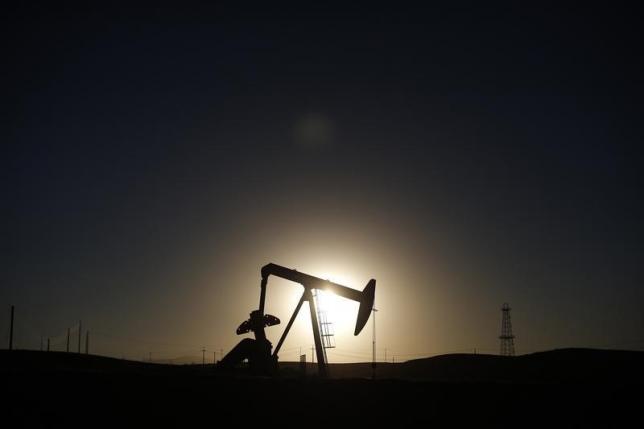 SINGAPORE – Crude oil prices edged up on Friday after falling as much as 2 percent the previous session, with analysts saying oversupply and a strong dollar would continue to weigh on fuel markets. U.S. crude futures CLc1 were trading at $45.46 a barrel at 0829 GMT, up 26 cents from their last settlement, while Brent crude LCOc1 rose 18 cents to $48.16 a barrel. But the gains followed steep falls the previous day on climbing U.S. crude inventories, and analysts said oversupply would continue to pressure oil markets. [EIA/S] "With oil production of major producers strong, falling output from U.S. shale will be insufficient to balance the oversupplied oil market over the next two years," said BMI Research, a subsidiary of rating agency Fitch Group. "The U.S., Russia and OPEC combined to produce more than 50 percent of global crude, and output from these producers has increased over 2015 despite weakening production in the U.S.," it added. French investment bank Natixis said it had "seen few signs recently indicating a change of tack in the oil markets," and that "oil prices will remain under pressure as long as the surplus remains in the market." The strong U.S. dollar is also seen as a drag on commodity markets as it makes imports for countries with other currencies more expensive. The greenback has gained almost 5 percent against a basket of other leading currencies .DXY since early October as markets expect the U.S. Federal Reserve to be the first major central bank to raise interest rates since the global financial crisis of 2008/2009. "Rising speculation that the Fed will raise rates will put further downward pressure on commodity prices," ANZ Bank said on Friday, adding that it expected U.S. crude futures to fall by 3 percent in the coming three months due to cost reductions by U.S. producers. "We expect that U.S. shale producers continued to lower production costs in the September quarter, and likely used the October rally in WTI to add significant hedging cover to production volumes," the bank said. Thanks in part to cheap crude prices, oil refinery profit margins are healthy, but analysts said there were headwinds. "Refining margins advanced for the second consecutive week supported by a recovery in gasoline cracks in the Atlantic basin. Gasoline cracks on the Gulf Coast have now increased 50 percent in the last month back to +$10 per barrel," investment bank Jefferies said. Jefferies added, however, that it saw "material headwinds" due to an emerging surplus of refined products. –Reuters