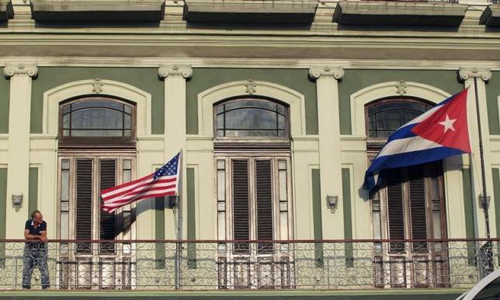 HAVANA - US companies can expect the same treatment as those from the rest of the world, receiving neither special benefits nor punishment, if there is a further commercial opening between Cuba and the United States, Cuba's foreign trade minister said. "US business people will enjoy the same treatment that is offered to the rest of the world that has ties with the island today," Rodrigo Malmierca, the minister of foreign trade and investment, said in an interview published in official Cuban media on Monday. "It's true that we will view positively, once the US laws permit it, that they will be able to trade and invest. But that does not imply a preferential treatment," Malmierca said. The United States and Cuba announced in December they would restore diplomatic relations and seek to normalize trade and travel that were disrupted more than 50 years ago during the Cold War. US President Barack Obama has relaxed some parts of the US economic embargo against Cuba. Although he has authority to do more, he needs the Republican-controlled Congress to remove the embargo definitively. The opening has generated tremendous interest from US companies looking to crack a market that has long been closed, but even with a relaxation of the embargo US companies need an agreement from the Cuban government or a Cuban state company to do business on the Caribbean island. - REUTERS