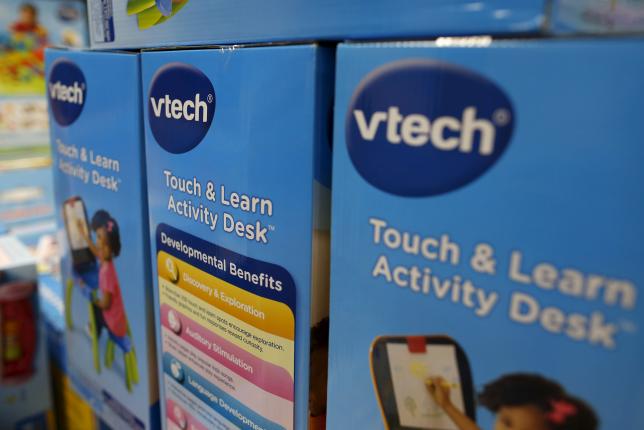 As more devices are connected to the Internet and as companies increasingly collect personal information about their customers, such attacks are expected to increase.

VTech has a market value of HK$21.9 billion ($2.8 billion). Tech giant Apple Inc has a market capitalization of $657 billion.

In VTech's case, information that should have been obscured and unrecoverable if the database were breached - such as passwords and secret answers - either wasn't obscured at all or was done so improperly, said Larry Salibra, founder and chief executive of crowd-sourced bug-testing platform, Pay4Bugs.

Salibra said these types of security measures were basic best practices that don't require a lot of money. "This seems to be a trend. Hardware manufacturers really don't value software skills - I would imagine because they don't see any immediate positive impact to their bottom line," Salibra said.

"Software talent is an easy place to be cheap with minimal consequences until something like this happens."

News site Motherboard reported that data belonging to some 4.8 million parents and more than 200,000 children was taken in the VTech attack. It said that included names, email addresses, passwords and home addresses of parents; as well as first names, genders and birthdays of children. (bit.ly/1kYba7r)

The site said it had spoken to a hacker who claimed to be behind the attack, who said he planned to do "nothing" with the data. Motherboard's claims could not be independently confirmed.

It did not say how many records were stolen.

Vtech said it has taken steps to prevent further attacks but did not provide details.

Vtech's stock has fallen 22 percent this year. Shares were suspended on Monday and trade in other Vtech securities has also been suspended, the company said. -Reuters