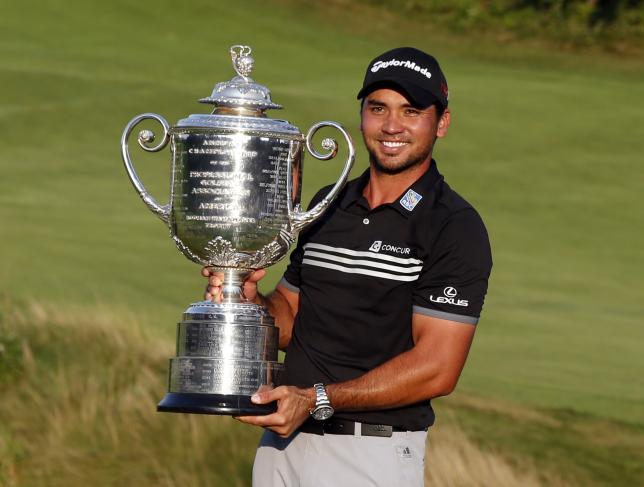 KOHLER - Bruised but toughened by a difficult childhood, Australia's Jason Day endured several close calls at the majors before finally landing one with a three-shot victory at the PGA Championship. The 27-year-old from Rockhampton in Queensland led from start to finish in the final round at Whistling Straits, closing with a five-under-par 67 before savouring the celebrations with his caddie and long-time coach, Colin Swatton. "The path that I was on (it) was never expected for me to be here where I was today," an emotional Day told reporters after keeping at bay American world number two Jordan Spieth as he posted a major record low of 20-under 268. "I lose my dad at 12, and then meet Colin and have him walk the journey with me and have him walk up the 18th hole with me was just a special, special thing, that I could never forget." Day's road to major champion was a long and difficult one. By his own admission, he went "off the rails a little bit" after his father died of cancer. He began drinking alcohol and getting into fights at school, convincing his mother that drastic action was needed. She sold the family home and sent him to Kooralbyn, a boarding school in Queensland whose alumni included Australia's first Masters champion Adam Scott and Olympic gold medallist Cathy Freeman. It was there that Day met Swatton, who quickly became a father figure to the young Australian as well as his coach. "To have Colin on the bag at the first major championship win, walking up 18, knowing that I've got the trophy, it was just hard," said Day. "I was trying to hold back the tears. "Me and Col have been working so hard on the swing, especially over the last few weeks, and the driving, it propelled me to win this week. "If I didn't drive as long and as straight as I did, there's no chance I would have won this tournament just hitting it just average." TIGER INSPIRATION Unlike most Australian golfers who were inspired by Greg Norman, Day's idol was Tiger Woods. When he was a teenager, Day read a book about Woods and decided to copy his high work ethic, spending hours on the practise range. The pair have since become friends and Woods was among the first to congratulate Day after his breakthrough win on Sunday, tweeting: "very happy for Jason. Great dude and well deserved." Day moved to the United States and turned professional in 2006, winning on the second-tier Nationwide tour in 2007. In 2010, he won his first PGA title, at the Byron Nelson Championship in Texas. A year later, he finished joint runner-up at the Masters, then outright second at the U.S. Open. A consistent performer, he recorded nine top-10 finishes in the majors but was unable to breakthrough until now. "I knew today was going to be tough, but I didn't realise how tough it was going to be," he said. "I learnt a lot about myself, again, being able to finish the way I did. The experiences that I've had in the past with previous major finishes definitely helped me prepare myself for a moment like this." Day, who climbed to a career-high third in the world rankings with his victory at Whistling Straits, was thrilled after setting a new low at the majors with his 20-under total. "It's a fantastic record to hold," he said. "There have been such amazing golfers ... and to have that record just goes to show the work I've put in is paying off." He is the 11th Australian to win a major, joining Peter Thomson (five), Norman (two), David Graham (two), Scott, Geoff Ogilvy, Steve Elkington, Ian Baker-Finch, Wayne Grady, Kel Nagle and Jim Ferrier. -Reuters