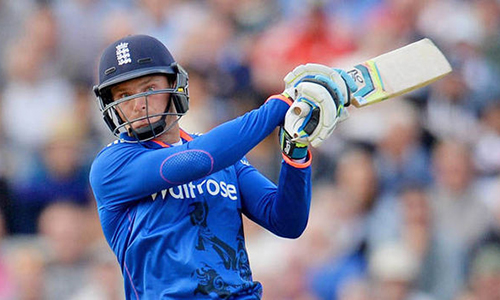 DUBAI – A brilliant century by Jos Buttler and a more routine one from Jason Roy fired England to an 84-run win over Pakistan in a high-scoring final one-day international in Dubai on Friday and a 3-1 victory in the series. England piled up 355 for five thanks to Roy's maiden ODI hundred and Buttler's record-breaking 116 not out. Pakistan scored quickly in reply but lost wickets steadily and were all out for 271 in the 41st over. Buttler's extraordinary knock came after being promoted to bat at number four at the end of a year in which he often struggled for runs. His century off 46 balls broke his own England record and he hit eight sixes -- another national best -- and 10 fours. Roy's innings, if less spectacular, was equally valuable after his opening partner Alex Hales fell for 22. Roy and Joe Root (71) added 140 for the second wicket before falling in successive overs to Yasir Shah and occasional bowler Azhar Ali. Skipper Eoin Morgan fell victim to opposing captain Ali's leg spin for 14 but Buttler took over as England plundered 129 off the last 10 overs. Pakistan kept up with the rate for more than 35 overs but steadily lost wickets. David Willey snapped up the first two, dismissing openers Azhar Ali (44) and Ahmed Shehzad (13) before running out Mohammad Hafeez, dropped by Hales, for 37. Babar Azam (51) was another batsman who scored at a run-a-ball, but he was caught off Adil Rashid who then had Mohammad Rizwan caught behind for 11. Hales made amends with his second catch, an outstanding one to dismiss the dangerous Shoaib Malik for 52 off 34 balls and England were in control of the game. After Sarfraz had become Rashid's third victim for 24 and Moeen Ali caught and bowled Wahab Riaz for one, Pakistan's task became almost impossible and Moeen sealed an emphatic England victory with his third wicket. The teams now play a three-match Twenty20 series, starting in Dubai on Thursday. SCOREBOARD