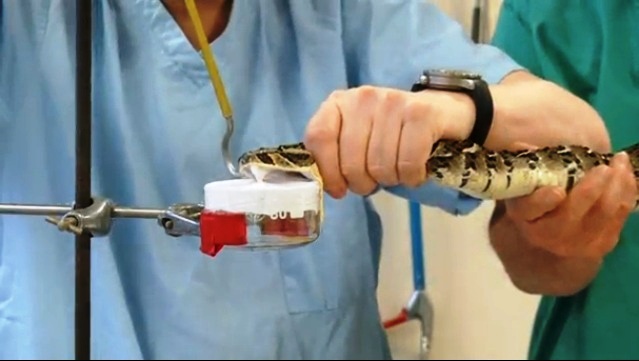 LIVERPOOL, ENGLAND / KADUNA, NIGERIA - A new anti-venom to treat victims of potentially deadly snake bites in sub-Saharan Africa is just a few years away from reality, according to scientists at the Liverpool School of Tropical Medicine (LSTM). They aim to create a potent new anti-venom that can be stored safely at room temperature, without the need for refrigeration. Dr. Robert Harrison is leading the research at LSTM's Alistair Reid Venom Research Unit, where he has collected 21 species - 450 animals in total - of sub-Saharan Africa's most deadly snakes. Harrison and his team have been extracting venom from the reptiles, using a process known as 'milking', to concoct a new anti-venom that he hopes will prevent the deaths and severe injuries of snake bite victims. "32,000 people are dying from snake bite every year in sub-Saharan Africa. But it's not only that; other people who survive the bite - about 100,000 of them - are living with severe disabled limbs or legs, just really very disabling conditions," said Harrison. He added that the impact on communities can be particularly severe if a snake bite renders a family's main bread-winner unable to work: "People are exposed to snakebite by whatever they're doing and wherever they're doing it. And what it does do is affect these people dramatically, because the loss of the main income earner for instance because his arm can no longer function or he's had his leg amputated as a result of snakebite. Or, god forbid, he dies from snakebite then you can see how massively that would affect this tiny little family unit that is living on probably less than a dollar a day." Anti-venoms are made by first 'milking' the venom from a snake before injecting it in low doses into a horse or sheep. The animal doesn't become ill, but the venom induces an immune response that produces anti-bodies in the animal. These anti-bodies are then extracted from the animal's blood to create anti-venom. In rural areas of sub-Saharan Africa where people are exposed to various species of deadly snakes, the current treatment involves a broad-spectrum anti-venom to cover all the snake species that could be responsible. But the current method for producing anti-venoms means the animals make only a small amount of anti-body to any one species; resulting in a weak anti-venom. Patients are therefore having to be treated with multiple vials; carrying an increased risk of side-effects and making the treatment largely unaffordable to rural subsistence farmers. According to the UK's Medical Research Council, a single vial of the most effective broad-spectrum anti-venom currently costs about $140 USD per vial, and because several vials are needed to achieve a cure it can cost over $500 USD per treatment; an insurmountable cost for people who often earn less that $1 USD a day. However, the research team at LSTM plans to vastly improve the potency of broad-spectrum anti-venom using an innovative new technique they've dubbed 'antivenomics', which targets unique proteins in a particular snake species' venom. This, they say, will significantly expand the effectiveness of the anti-venom to cover all the poisonous snakes of sub-Saharan Africa. "So what we're going to try and do is take our existing anti-venom which we made for Nigeria and has been used in Nigeria; which is effective, and it's cheap and it's safe. Now we're going to make it more effective against all the other snakes of sub-Saharan Africa. And we're going to do that by identifying the proteins that are unique to all the other species. And taking these unique proteins. i.e. different from the Source Scale Viper, the Puff Adder or the Spitting Cobra, and add that to the venoms of the original three," explained Harrison. The anti-venom will be manufactured using a more cost-effective system developed in Costa Rica, reducing costs by up to three quarters and making it more affordable to rural African communities. The current need for anti-venoms to be refrigerated throughout their manufacture and storage is a further limitation that they hope to overcome. Harrison's team plans to test a series of special molecules added to the anti-venom during creation to increase its stability at ambient temperatures, with the aim of it still being effective after at least a year stored at room temperature. "And at the end of three-and-a-half, four years now; so 2018, July 2018 - we will do the ultimate test of whether this new anti-venom, when it's stored at room temperature for at least a year, is effective against all the snakes of sub-Saharan Africa." - Reuters