Del Potro refuses to be downhearted after comeback loss 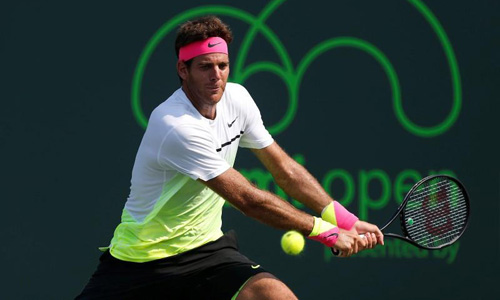 Del Potro refuses to be downhearted after comeback loss

MIAMI - Argentine Juan Martin del Potro's latest comeback from injury ended in defeat to Canadian Vasek Pospisil at the Miami Open on Thursday. Del Potro, the former world number four and U.S. Open winner in 2009, has fallen to 616th in the world rankings after a wrist injury wrecked his 2014 season. The South American played just four tournaments in 2014 before undergoing surgery to his left wrist last March and after returning to action in Sydney in January he withdrew from the Australian Open and said he needed more surgery. Pospisil won 6-4 7-6(7) although Del Potro had his chances in the second when he was broken when serving at 5-4 up and then double faulted on set point in the tie-break. Del Potro enjoyed his usual passionate support from Argentine fans at Key Biscayne but said he was not too downhearted by his loss. "I don't feel frustrated. No. I have to take the positive things on my comeback," he said. "I only played one other official match after one year, so this is a good signal for the future. "It doesn't matter the score for now. Obviously when I was down there on court I wanted to win the match but I couldn't close the set because I made simple mistakes. "I didn't serve well in the special moments, which is tough for me with all of these things. But now I'm okay. I don't have any physical problems after the match, and I will be recovering soon for the future." It is clear that Del Potro is still struggling to bring his wrist into play, particularly struggling with his two-handed backhand. "I'm not 100 percent confident to hit my best backhands yet and I also need time to improve my backhand again. "But I am working hard. I am working hard every day a little more on my backhand. I think it's the only way to get to passed through all of the things and get well for the future," he said. Friday's action sees second seed Rafa Nadal up against fellow Spaniard Nicolas Almagro while third-seed Andy Murray takes on American Donald Young. - REUTERS