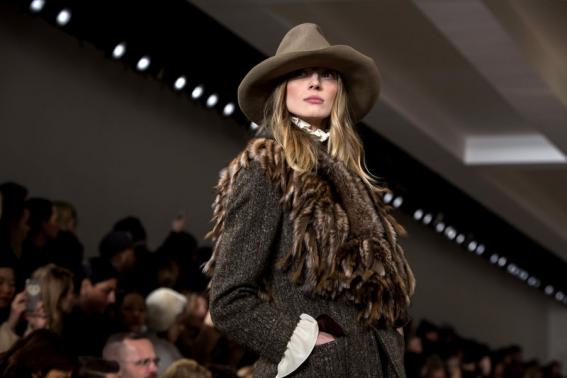 NEW YORK (Reuters) - Hemlines fell, sultry dresses hugged the body and tailored coats with generous fur trim oozed elegance on the runway as designers at New York Fashion Week spun a retro 1970s look with sleek silhouettes for their 2015 fall/winter collections. Chunky-knit sweaters, high collars, long layering and fur hats paired with ponchos and capes exuded a warm, comfortable feeling as the week-long fashion fest came to a close on Thursday and temperatures outside dipped below freezing. "The bohemian side of the 70s is what you are seeing," said Lizzy Bowring, head of the catwalks department at trend forecasting and analysis company WGSN. "The look is much closer to the body, more streamlined, much more elegant than we have seen before." Ralph Lauren, one of the final designers to show his collection, topped an embroidered, feathered skirt with a cashmere turtleneck sweater and a shearling jacket with suede pants. The look was luxurious with long, belted coats and jackets with fur collars or sleeves, and gowns in cream floral lace, bronze tulle and black satin with a plunging back. "What I am really loving the most is the continuation of this 1970s sensuality," said Ken Downing, fashion director and senior vice president of Neiman Marcus stores. Many designers dropped hemlines to mid-calf, while others kept them higher. Black and a rich color palette of burgundy, rust and olive, along with slit skirts, plaids, belted waists and beading and embroidery also featured prominently on the runway. Rugged met refined as coats and jackets were more structured with a military influence and large buttons, and chunkier heels appeared on shoes and boots. Calvin Klein kept to the '70s theme in his collection with patch-work leather coats and jackets and leather sheath dresses. "You will see a lot of strong, tailored looks, something quite put together with a lot of definition to the waist," Jason Wu, a favorite designer of First Lady Michelle Obama, said about the upcoming season. New York Fashion Week attracts more than 230,000 people to shows held mostly at the Mercedes-Benz Fashion Week tents at Damrosch Park at Lincoln Center for the Performing Arts and other venues. In September the event will be moving to a new, and as-yet undisclosed, location in Manhattan. The semi-annual Fashion Week, which is followed by shows in Europe, generates $887 million in economic activity each year, according to the New York City Economic Development Corporation.