Despite Greece, euro zone is turning the corner 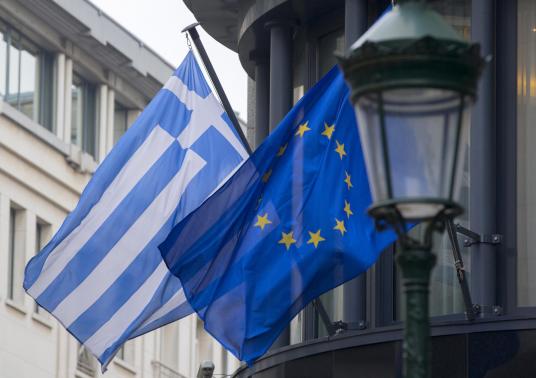 Despite Greece, euro zone is turning the corner

LONDON (Reuters) - The latest episode of Greece's debt crisis has revived doubts about the long-term survival of the euro, nowhere more so than in London, Europe's main financial center and a hotbed of Euro skepticism. The heightened risk of a Greek default and/or exit comes just as there are signs that the euro zone is turning the corner after seven years of financial and economic crisis and that its perilous internal imbalances may be starting to diminish. To skeptics, the election of a radical leftist-led government in Athens committed to tearing up Greece's bailout looks like the start of an unraveling of the 19-nation currency area, with southern countries rebelling against austerity while EU paymaster Germany rebels against further aid. A last-ditch deal to extend Greece's bailout for four months after much kicking and screaming between Athens and Berlin did little to ease fears that the euro zone's weakest link may end up defaulting on its official European creditors. US economist Milton Friedman's aphorism - "What is unsustainable will not be sustained" - is cited frequently by those who believe market forces will eventually overwhelm the political will that holds the euro together. Countries that share a single currency cannot devalue when their economies lose competitiveness, as occurred in southern Europe in the first decade of the euro's existence. There is no mechanism for large fiscal transfers between member states. So the only option has been a wrenching "internal devaluation" by countries on the periphery of the euro area, involving real wage, pension and public spending cuts and mass unemployment that has caused deep social distress. Austerity has fueled radical forces of political protest and may be running out of democratic road - not just in Greece - but none of the alternative ways out of the euro zone's economic divergence dilemma looks remotely plausible. "The history of the gold standard tells us that an asymmetric adjustment process involving internal devaluation in debtor countries, with no corresponding inflation in the core, is unlikely to be economically or politically sustainable," economic historians Kevin O'Rourke and Alan Taylor wrote in the Journal of Economic Perspectives in 2013. "What is desirable for the euro zone may not be feasible." Germany has so far been unwilling to see either higher inflation, debt forgiveness, issuing common euro zone bonds or cross-border fiscal transfers. There is scant support anywhere for closer political and economic integration of the euro area. "The strategy of the euro zone has been to wait for something to turn up," says a senior figure in the British financial establishment, who observed the euro zone crisis from close up but outside. "In the 1930s, World War Two turned up. Maybe something else will turn up," he said, speaking on condition of anonymity. The European Central Bank has acted at key moments to hold the euro zone together, vowing in 2012 to do "whatever it takes" to save the currency and now launching a massive program of buying government bonds to spur the economy and avert deflation. ECB action can only buy time for governments to implement structural economic reforms that could close the competitiveness gap by raising potential growth over time. But countries like France and Italy largely failed to use that breathing space in 2013-14 to shake up labor markets, pension and welfare systems. Yet things can go right as well as wrong. A nascent cyclical recovery in the euro zone, aided by lower oil prices, a weaker euro and ECB money-printing, may narrow the imbalances that have led skeptics to predict the euro's demise. Ireland and Spain, which have been through the wringer of austerity programs and structural reforms in return for European assistance, are now the fastest growing economies in the currency bloc. Portugal too is perking up. German wages are rising faster than prices, giving a boost to consumer spending and raising the prospect that inflation in the bloc's biggest economy may outpace the rate in southern Europe for several years. That would make economic adjustment more symmetrical, and less agonizing for the south. There are also signs that France and Italy, the euro zone's second and third largest economies, are finally tackling some of the economic reforms that politicians long feared to touch, albeit at a slow and gradual pace. French President Francois Hollande's government has just rammed through a bill to loosen some shackles on business such as Sunday trading and plans new steps to ease labor regulation. Italian Prime Minister Matteo Renzi has introduced a jobs act to ease hiring and firing and is making progress on reform to streamline parliament and the electoral system. "Spain shows that reform is possible to create a growth environment and significant job creation," said Luigi Speranza, co-head of European economics at BNP Paribas bank in London. "The return of growth could make it easier for Renzi to make reforms in Italy, and Hollande in France." The European Commission's budget leniency for Paris and Rome may assist that process by rewarding them for planned growth-enhancing reforms with more time to cut their deficits and debt. Another encouraging sign is that lending to businesses in Italy and Spain is picking up following last year's ECB stress tests of European banks and their interest rates are falling, narrowing the gap with the euro zone core. "What worries me is that some of the factors behind the rebound are temporary," Speranza said. "Structural reforms could make that more sustainable and build confidence." A Greek default or exit from the euro zone - whether by "Grexident" or intention - could shatter that returning trust, even though Athens accounts for just two percent of the bloc's economy. So Greece's fate remains entwined with the euro's survival.