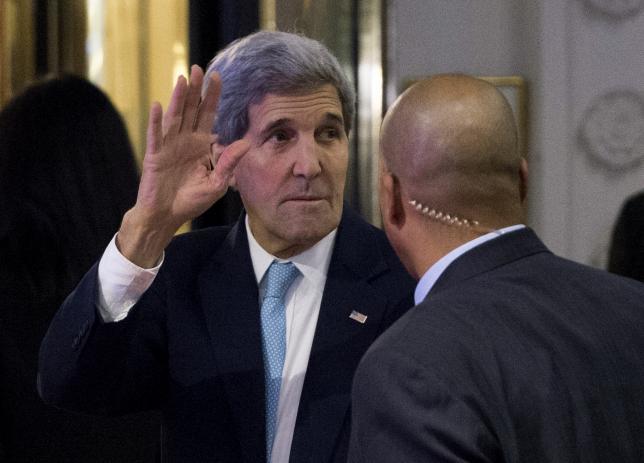 VIENNA - Two weeks after they jointly called for a political solution to Syria's civil war, foreign ministers and senior officials from Russia, the United States, Europe and the Middle East struggled to turn that idea into a more concrete plan. As those officials returned to Vienna ahead of a new round of talks on Saturday, diplomats said there had been little progress, with Western powers and their allies insisting President Bashar al-Assad must leave office, and his backers Russia and Iran saying voters must decide his fate. "There are a number of difficult issues of which the future of Bashar al-Assad is ‎probably the most difficult and that will certainly be an important subject tomorrow," Foreign Secretary Philip Hammond told reporters in Vienna after meeting his Egyptian counterpart Sameh Shukri. Earlier on Friday, Hammond said at a news conference in Prague: "We believe that Bashar al-Assad has to go as part of the transition in Syria but we recognise that there will be a transition, he may play a part in that up to a point of departure." Progress has been difficult in preparatory meetings, officials said, adding that the ministers might be able to move more quickly towards ending the conflict, in which 250,000 people have been killed and four million have fled Syria. A central sticking point is deciding which organisations are considered opposition groups, and can therefore take part in the U.N.-led political process called for in a joint statement after the last meeting, and which are terrorists. “It will be practically impossible to agree on that list at these talks," a Western diplomatic source said. "It will take time. The list will not be done in a day. We are going to start to talk.” After the last meeting's broad statement of intent, Saturday's discussions would focus on these more difficult details, a senior Western diplomat said. "Don’t measure it (the meeting) by the length or even existence of a communique," the diplomat said. "Measure it by whether there was a genuine discussion about things that really do divide us, including the future of Assad, which is what we should be getting on to, as well as these famous lists, the lists of who counts as a terrorist and the list of who counts as an opposition group," they added. Officials said they had modest expectations for Saturday's talks, which will feature major powers such as China, France and Britain, as well as Middle Eastern states including Saudi Arabia, Turkey, Qatar and the United Arab Emirates. Asked if he expected a breakthrough on Saturday, UN Syria envoy Staffan de Mistura, who is tasked with overseeing the political process that would lead to elections, told reporters: "Breakthrough is a big word. What we are definitely looking for is to keep the momentum going." -Reuters