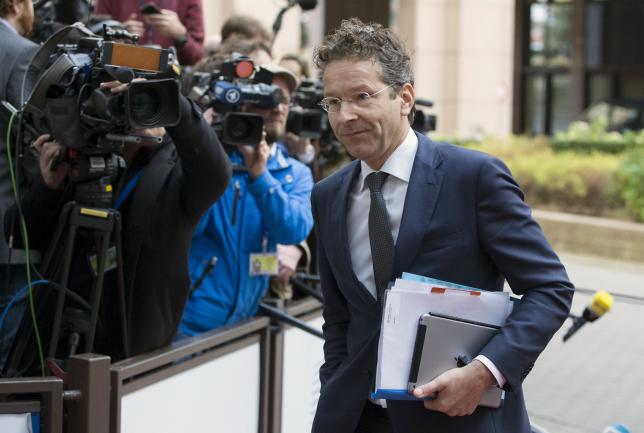 BRUSSELS - Dutch finance minister Jeroen Dijsselbloem warned that countries which fail to adequately guard Europe's borders and do not take in a fair share of refugees could find themselves outside the borders of a future "mini-Schengen" zone. In an interview in Belgian business dailies De Tijd and L'Echo on Friday, Dijsselbloem, who is also the chair of the euro zone group of finance ministers, said the EU's passport-free Schengen zone could not work if only a few countries gave shelter to refugees. "There are a few countries that are carrying the heaviest burden in the asylum crisis, taking in the most refugees," he told the papers, naming Sweden, Germany, Austria, Belgium and the Netherlands. "Some countries are now saying, 'It's not our problem. It's yours. Good luck.' That places our solidarity under huge pressure," he said. Many members of the 26-country Schengen zone, particularly poorer Eastern European ones, oppose a European Commission plan to distribute refugees who have arrived in Europe since the start of the year. Poland's newly elected government has said the risk of militant attacks in the wake of the Paris shootings makes it harder for it to shelter asylum seekers fleeing war and poverty in the Middle East. Dijsselbloem said his aim was to preserve the Schengen zone, but if countries did not shoulder their fair share, others would have to go it alone, since the migrant influx would otherwise endanger their generous welfare states. "To preserve them, you need to guard the external borders. (Otherwise) loads of people come and demand support and they blow the system up. That is what is happening now in the Netherlands," he said. He called for more joint investment in guarding the EU's external borders and for more support for refugee camps in Turkey and Lebanon. "If we do not do it in the external borders of the EU's 28 members, or in the Schengen zone, then maybe we will have to do it on the level of a mini-Schengen zone," he said, adding he wanted to avoid that outcome. The Netherlands first floated the idea of a passport-free inner core earlier this month, though Germany, without which such a plan would be unworkable, immediately distanced itself from the proposals. On Wednesday, Jean-Claude Juncker, the head of the EU's executive, warned that the fate of the Schengen zone was bound up with that of the euro single currency: the one would not survive the failure of the other. Schengen consists of 22 countries in the European Union along with Norway, Iceland, Switzerland and Liechtenstein. -Reuters