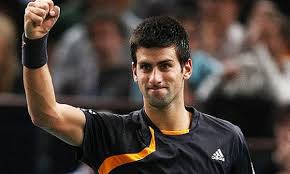 PARIS – Novak Djokovic beat Tomas Berdych 7-6 (3) 7-6 (8) in the quarter-finals of the Paris Masters on Friday to claim his 20th consecutive win and stay on course for an unprecedented third title in a row at the event. Both players conceded only one break point as all games went to serve and the world number one prevailed on his second match point to set up a mouthwatering semi-final meeting with fourth seed Stan Wawrinka after the Swiss downed 14-times grand slam champion Rafa Nadal 7-6 (8) 7-6 (7). A day after his serve was less than perfect against Gilles Simon, Djokovic was extremely accurate with his delivery and played better on the key points to see off Czech Berdych, the 2005 champion. The Serb, looking to become the first man to win six Masters titles in a season, now has a 20-2 win-loss record against Berdych who has been beaten in all their 16 matches on a hard court. It was Djokovic's 650th career win, the first he clinched without breaking serve. "It was a really tough match, a real battle that went to the last point. I'm just glad I managed to stay calm in the important moments and pull it through," said Djokovic. Wawrinka also had to battle hard to knock out Nadal, ending a tense encounter with a superb forehand pass after saving two set points in the second set. Wawrinka has now beaten Nadal is three of their last four meetings after losing their first 12 matches. Earlier, Andy Murray reached the last four for the first time when he saw off local favourite Richard Gasquet 7-6 (7) 3-6 6-3. The world number three allowed the French 10th seed to come back into the contest when he was let down by his first serve in the second set but regained his momentum. Murray next plays Spain's David Ferrer who downed big- serving John Isner 6-3 6-7 (6) 6-2, with the American finishing the match exhausted. Briton Murray got off to a strong start, breaking in the second game on his way to a 3-0 lead. Gasquet, however, remained aggressive, took his chances and was rewarded with a break of serve in the seventh game as his opponent grew cautious. The Frenchman, backed by a partisan Bercy crowd, went 5-3 up in the tiebreak and at 6-5 Murray saved a set point with a superb sliced passing shot before going on to clinch the opener. Murray was forced on to the back foot in the second set and managed only six winners, compared to 20 in the opener, as Gasquet levelled. The Olympic and twice grand slam champion struggled on serve and allowed his opponent to break for 2-1 in the decider but quickly got back on track. Murray stole Gasquet's serve before breaking again for a 5-3 advantage and then wrapping up victory. –Reuters