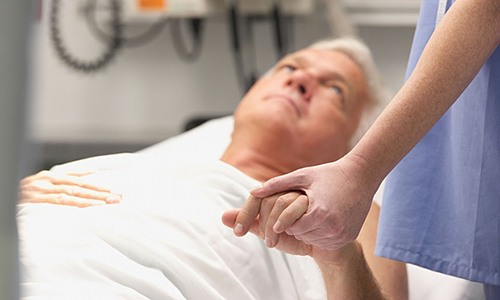 BOSTON – Doctors tend to get less aggressive care before death than the average person, a new study finds.

The question of what kind of care doctors themselves would receive is often on patients' and families' minds, the researchers say.

"Family members of critically or terminally ill patients sometimes seek reassurance from the physician that their loved ones are receiving the same care their physicians would receive," said lead author Joel Weissman, of Brigham and Women’s Hospital in Boston.

Previous research teams have asked doctors what treatments or services they would choose at the end of their lives, but what care they actually received hasn't been clear, Weissman told Reuters Health.

They analyzed services received in the last six months of life, including surgery, hospice care, intensive care, and whether the person died in a hospital.

Doctors were more likely, however, to receive hospice care and to use less costly care before death, but those findings may be due to chance.

"Doctors understand (that) modern medicine can both help and harm people, especially at the end of life, and they understand its limits," said Weissman.

The researchers also compared the doctors to 2,081 similarly aged lawyers who died around the same time, since lawyers and physicians tend to have similar educations and similar social and economic statuses. Other than lawyers being more likely to die in hospitals, the two groups received similar levels of care at the end of life.

"What this says is that there is something about occupation and socioeconomic status that influences end-of-life care, but doctors still tend to receive less intensive end-of-life care," said Weissman.

The similarities between end of life care for the two professions may also be due to the fact that lawyers have helped clients with end-of-life planning, like estate planning and do-not-resuscitate orders, Dr. VJ Periyakoil of Stanford School of Medicine in California told Reuters Health.

"We’ve seen what goes terribly wrong when people are not prepared or not sure what people want for themselves," Periyakoil said about doctors. "Whereas with lawyers, the angle would be slightly different."

The new study didn't analyze how satisfied people were with the care they received at the end of their lives, but Weissman said the consensus is that a good death is consistent with a person's goals and preferences.

"I think the big message is to have a conversation with your physician no matter what your age," he said. "And think of this study when thinking about your goals."

Periyakoil, who was not involved with the new study, said her own research shows that about 99 percent of doctors report barriers in discussing end-of-life care with their patients.

She has led the creation of the Letter Project, which guides people through writing down their wishes for their doctors (med.stanford.edu/letter.html).

"We’re hoping once a patient documents it, doctors will take the opportunity to have a very focused discussion," said Periyakoil.

She said people can also talk with their families about their goals and preferences. –Reuters