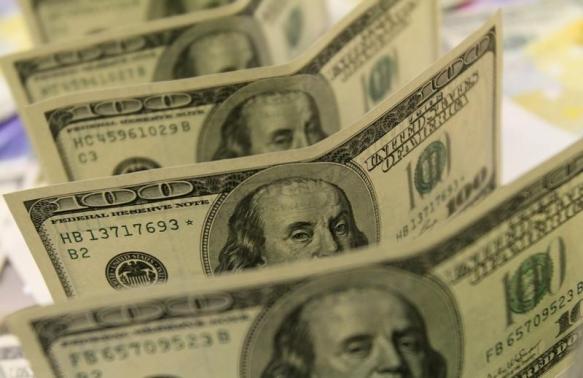 NEW YORK - The dollar surged on Friday as weak inflation data failed to stem expectations the Federal Reserve will move to tighten monetary policy, and the greenback's rise pressured stocks and commodities. The dollar index .DXY rose 0.8 percent, setting up its first close above 100 since April 2003. The Fed's policy-setting committee meets next week. Stocks fell on Wall Street on concerns of the impact of higher rates and a stronger dollar on corporate profits. The S&P 500was down for a third straight week, though it is just 3 percent below its record high set early this month. "The stronger dollar, the continued hammering of the euro equals continued lower equity prices ahead of the Fed comments next week," said Michael James, managing director of equity trading at Wedbush Securities in Los Angeles. "We'll know more of the Fed's thinking on Wednesday but right now most people are expecting a rate hike to come in June and the equity markets not to be very receptive of that." The Dow Jones industrial average .DJI fell 145.91 points, or 0.82 percent, to 17,749.31, the S&P 500 .SPX lost 12.55 points, or 0.61 percent, to 2,053.4, and the Nasdaq Composite .IXIC dropped 21.53 points, or 0.44 percent, to 4,871.76. For the week, the Dow was down 0.6 percent, the S&P 500 was off 0.9 percent and theNasdaq was down 1.1 percent . The MSCI All-Country World equity index .MIWD00000PUS fell 0.6 percent. The FTSEurofirst 300 pan-European index .FTEU3 closed up 0.3 percent. Stocks in Europe continued to be supported by the massive bond-buying program at the European Central Bank. The divergence in monetary policy between the ECB and the Fed pushed the euro EUR=further down against the greenback, with the bloc's currency hitting a 12-year low of $1.0460. It was last down 1.3 percent at $1.0496. The dollar rallied even after disappointing US inflation and consumer sentiment data, which normally would weaken the currency. "This isn't so much about the data, rather the Fed and what to expect from next week's meetings," said Camilla Sutton, chief currency strategist at Scotia Capital in Toronto. The dollar index .DXY added 0.7 percent to 100.16. US crude CLc1 fell 4.4 percent to $45 per barrel, while Brent crude LCOc1 fell 4.6 percent to $54.43. The global oil glut is getting bigger and US production shows no sign of slowing, the International Energy Agency said. Largely because of the oil selloff, the Thomson Reuters/CRB Commodities Index .TRJCRB settled at a six-year low. The US benchmark 10-year Treasury note yield US10YT=RR rose to 2.1192 percent from late Thursday's 2.096 percent, with the price down 7/32. "The market's consolidating," said Kim Rupert, managing director of global fixed income at Action Economics in San Francisco. "It's hard to be a buyer at this point." Spot gold XAU= edged up 0.2 percent to $1,156 an ounce, following nine consecutive sessions of declines. Copper CMCU3 gained 0.25 percent to close the week up 2 percent.