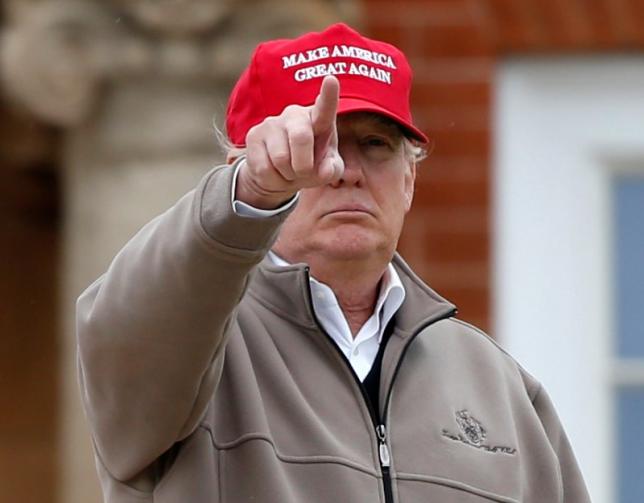 NEW YORK - Donald Trump is staking his run for US president in part on a vow to protect American jobs. But this month, one of his companies, the elite Mar-a-Lago Club resort in Florida, applied to import 70 foreign workers to serve as cooks, wait staff and cleaners. A Reuters analysis of US government data reveals that this is business as usual in the New York property magnate's empire. Trump owns companies that have sought to import at least 1,100 foreign workers on temporary visas since 2000, according to US Department of Labor data reviewed by Reuters. Most of the applications were approved, the data show. Nine companies majority-owned by Trump have sought to bring in foreign waitresses, cooks, vineyard workers and other labourers on temporary work-visa programs administered by the Labor Department. The candidate's foreign talent hunt included applications for an assistant golf-course superintendent, an assistant hotel manager and a banquet manager. Two of his companies, Trump Model Management and Trump Management Group LLC, have sought visas for nearly 250 foreign fashion models, the records show. Trump’s presidential campaign and a lawyer for the businessman declined to comment. The Mar-a-Lago Club could not be reached for comment. The analysis of Trump's history of actively importing foreign workers comes as he has emerged as an early front-runner in the race for the Republican nomination in the November 2016 presidential election. Trump has positioned himself as a champion of American workers whose livelihoods are threatened by illegal foreign labourers and the offshoring of U.S. jobs. “I will be the greatest jobs president that God every created," he said in announcing his candidacy on June 16. "I will bring back our jobs from China, Mexico and other places. I will bring back jobs and our money." Trump generated both notoriety and buzz by singling out Mexican immigrants in the United States. “When Mexico sends its people, they’re not sending their best," he said in the speech. "They’re bringing drugs. They’re bringing crime. They’re rapists." In a speech on July 11, Trump distinguished between those working legally and illegally in the United States, saying thousands of "legal" Mexicans - "incredible people" - have worked for him over the years. The Labor Department records don't specify the nationality of the foreign workers sought by companies. But Trump could be bringing many Mexican workers into the United States. Reuters examined records of applications for three categories of temporary work visas - the H-2A, H-2B and H-1B programs - submitted by employers to the Labor Department. A CONTROVERSIAL VISA PROGRAMME The temporary work visa programme through which Trump's companies have sought the greatest numbers of workers, H-2B, brings in mostly workers from Mexico. Mexicans made up more than 80 percent of the 104,993 admissions to the United States on H-2B visas in 2013. The Trump companies have sought at least 850 H-2B visa workers. The H-2B programme, which receives little government oversight, is used by companies in sectors ranging from hospitality to forestry to hire foreign workers for temporary jobs. Companies must prove that the jobs are seasonal - and that they tried and failed to hire Americans. U.S. government watchdogs have criticized the H-2B and H-2A programs over the years for failing to protect foreign and American workers alike. In 2003, the Labor Department Inspector General said: “Abuses of these programs may result in economic harm to American workers and businesses, exploitation of foreign workers, and security risks associated with aliens who are admitted to this country by fraudulent means.” This year, the Government Accountability Office published a report saying that workers in the country on H-2A and H-2B visas have experienced abuse, including being charged illegal recruiting fees, substandard housing and low pay. The Mar-a-Lago, a luxury resort in Palm Beach, Florida, has sought the most foreign workers of the nine Trump businesses: 787 workers since 2006, according to the data. This month, the resort filed paperwork seeking to bring in 70 foreign workers later this year on H-2B visas to serve as maids, cooks and wait staff, according to paperwork known as “job orders” published on the Labor Department's web site. In addition to the resort and the modelling agencies, the Trump-owned companies identified in the Reuters analysis were Jupiter Golf Club, Lamington Farm Club LLC, Trump Miami Resorts Management LLC, Trump National Golf Club LLC, Trump Payroll Chicago LLC and Trump Vineyard Estates LLC. -Reuters