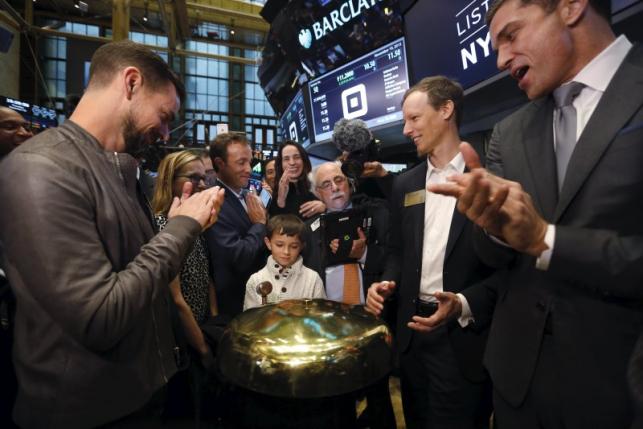 SAN FRANCISCO – Shares of Square Inc, the mobile payments company co-founded and still run by Twitter Inc Chief Executive Jack Dorsey, soared as much as 64 percent in their market debut, following a marked-down initial public offering, countering the negative sentiment that has nagged at Silicon Valley startups in recent weeks. The steeply discounted IPO price, at less than 60 percent of the company's last private valuation, had raised questions about the prospects of other so-called 'unicorns' - startups worth at least $1 billion - that might want or need to go public. A number of tech IPOs have performed poorly over the past year, and mutual fund investors including Fidelity Investments have been marking down the value of their private tech holdings. Dispelling some of the gloom, Square's shares jumped to a high of $14.78 in early trading on Thursday and closed at $13.07, booking a 45 percent gain. The stock pop came after the IPO priced at $9 late on Wednesday, well below the expected range of $11 to $13 and even farther below the $15.46 price of Square's last private financing in 2014. It bucked a difficult stretch for IPOs, which are trading down about 5 percent for the year. Investors wary of Square's valuation likely waited until the shares landed on the public market to buy, analysts said, and the weak price set on Wednesday created a pile-on Thursday morning that drove the stock higher. "The IPO buyers have very healthy skepticism about unicorn valuations," said Chris Bulger, managing director of Bulger Partners, a tech advisory firm in Boston. Despite Square's 42 percent valuation drop from its last private financing round, most backers scored a payday. Investors who bought shares a year ago were protected by a 'ratchet', ensuring they would get a 20 percent return, and some early-stage investors bought Square at less than a dollar a share. “It's still a good game," Bulger said. "Just in the last two rounds you're not getting venture capital-like returns for the risk you are taking." Square's strong start was followed by a positive debut by online dating empire Match Group Inc, whose shares finished the day up nearly 23 percent. Tom Donino, co-head of trading at FNY Capital Management, said it is unusual to see a stock trade up so much after pricing below the expected range, as Square's did. "There's obviously retail and other demand for the stock, but the pricing seems strange," he said. “The fact the stock is now this strong will probably quash" the bearish sentiment around private-company valuations, he added. Square raised $243 million in its IPO, money the company needs to cover heavy losses. It reported a loss of $131.5 million in the first nine months of the year after losing $117 million in the same period a year earlier, though revenue rose 49 percent to $892.8 million. The debut comes at a time when slowing global growth and uncertainty about the timing of a U.S. interest rate hike have kept investors on edge. Ken Polcari, director of the NYSE floor division at O'Neil Securities, said he thought the low price of the offering, which cleared the way for the first-day pop, was a smart move in the current market environment. “Those particular types of companies - these unicorns that have these crazy valuations - you are going to see some of them become more conservative in their pricing because it makes sense. What they don’t want to do is damage themselves by trying to be so super-aggressive." DORSEY IN THE SPOTLIGHT Dorsey, who was celebrating his 39th birthday on Thursday, owns 21.5 percent of Square following the IPO and is the company's biggest single shareholder, with a stake now worth almost $930 million. The high-flying executive is also trying to run Twitter, another company with substantial obstacles to growing profits. Shareholders in both companies have been concerned about Dorsey's dual role. Square's IPO filings show a net loss of $29.6 million in the second quarter, ballooning to nearly $54 million in the third quarter. "Square's financials leave much to be desired," said Brian Hamilton, chairman of data firm Sageworks. "But there's still a lot to like here." Square Chief Financial Officer Sarah Friar said in an interview with Reuters that the company has been investing heavily in new hardware, such as chip-enabled card readers, and building out its lending business, Square Capital. “The slope of the line is up and to the right in terms of our operating margin," she said. "So we are going to grow but we are going to do it in a disciplined way.” Friar pointed to the consumer trend of shopping less with cash. “Still, 40 percent of all commerce is done with cash and check, but slowly that’s eroding. So that’s one big reason for the growth,” she said. Square, founded in 2009, has built buzz and a substantial customer base with a credit card reader that can turn a mobile device into a payment terminal. It has made its mission to enable any small business to easily accept any form of payment, and also provide them with additional services ranging from lending to payroll management. But the company faces intense competition in the payments market, with Apple Inc launching its Apple Pay service, Amazon.com Inc exploring in-store payments, and startups such as Stripe Inc entering the fray. Meanwhile big banks and card processors continue to dominate the payment business, and Square has to pay out most of its gross revenues to banks and credit card networks. Square sold 25.7 million class A common shares in the offering, led by Goldman Sachs, Morgan Stanley and JP Morgan. Start Small Foundation, a charitable fund created by Dorsey, sold about 1.35 million shares. The low offering price triggered a 'ratchet' in which late-stage investors get an addition share distribution. -Reuters