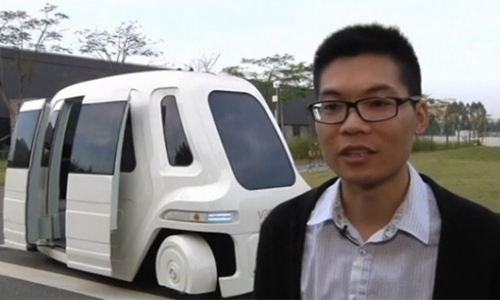 BEIJING (92 News) – Robots are no longer a far flung future concept, and are taking their place on China's work force. The country's largest property developer, China Vanke, is investing in its own robots to do certain jobs in the face of a labor shortage in the world's most populated country. This driverless car is among the robots that Vanke is aiming to bring in. The company says it's patrol car has finished testing, and it plans to introduce a floor-sweeping robot later this month. The driverless car, which features six seats and a large space in the center, can run up to about 35 km/h (22 mph), said Zhang Jinming, who helms the project. Person-in-Charge of Driverless Car Project, Zhang Jinming, says: "We hope this is the future of housing estates. We hope it can also solve issues that come along with normal cars. First of all, it is safer. It will not cause accidents that are due to human errors, such as having drivers who are drunk or sleepy. Secondly, it can save labor cost." Unlike Google's driverless cars that are designed to run on public roads, Vanke's cars aim to transport people within an enclosed compound. The car is guided by GPS as well as magnetism - magnets can be placed one meter apart along a fixed route to guide the car. The car runs on electricity provided by solar panels. One charge is enough for a day's use. A small radar at the front of the car can also detect obstacles ahead and trigger an emergency stop. Vanke already has robot chefs in operation at several of their canteens. They're also planning a robot-managed hotel in Shenzhen, scheduled to open in 2017. –Reuters