ECP issues schedule for elections on 16 seats of KP Assembly


PESHAWAR (92 News) – The Election Commission of Pakistan (ECP) has issued schedule for elections on sixteen seats of Khyber Pakhtunkhwa Assembly in tribal districts.

According to the schedule, polling will be held on the second of July. The candidates can file their nomination papers with the returning officers from Thursday to Saturday.

The candidates can withdraw their nomination papers by 29th of this month whilst on the same day, the revised list of candidates will be published.

Election symbol to the contesting candidates will be allotted on 30th this month.

The ECP has directed that no posting or transfer of any officer be made in the tribal districts till the publication of names of returned candidates.

The commission has also directed that no government functionary or elected representative shall announce any development scheme for the constituencies where the elections are to be held. 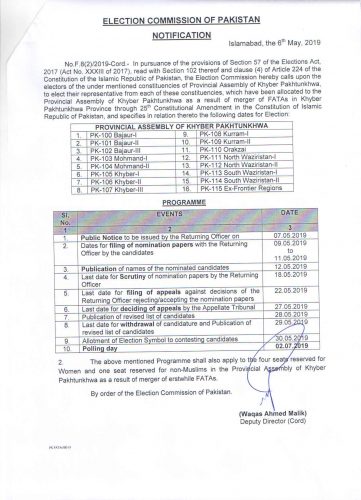 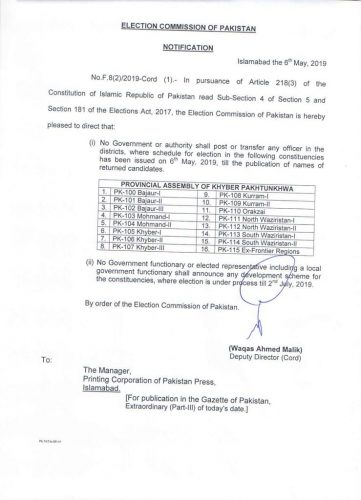 ECP has no power to de-seat a lawmaker for being on Fourth Schedule: IHC

Earlier, the Islamabad High Court (IHC) has ruled that the Election Commission of Pakistan (ECP) has no power to disqualify a lawmaker for being his name on the Fourth Schedule.

The ECP had disqualified Shah Muhammad, who was elected on the provincial assembly seat (PK-89) in Bannu, for being on the list compiled under the Fourth Schedule of the Anti-Terrorism Act of 1997.

Babar Awan contended that the district police officer concerned had given his client a clearance certificate before he submitted his nomination papers for the 2018 general elections.