ECP looks like a subsidiary of judiciary, says Khurshid Shah 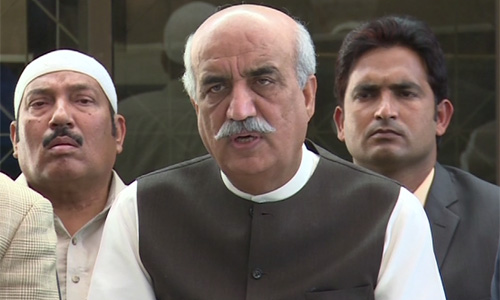 ECP looks like a subsidiary of judiciary, says Khurshid Shah

ISLAMABAD (92 News) – Opposition leader in the National Assembly Syed Khurshid Shah has on Friday said that it looks like Election Commission of Pakistan is a subsidiary of judiciary and it needs to be made strong and powerful. Talking to media after meeting Chief Election Commissioner (CEC) Sardar Raza Khan, Khurshid Shah said that the decision to withdraw election schedule of 81 Union Council’s 24 hours before polling was a wrong decision, adding that the ECP should write a letter to Supreme Court regarding its authority. “The ECP cannot be dictated,” he said. The opposition leader said that everyone accepted the decision of people in Badin, adding that they have tried much to hold free and fair elections. He claimed that the independent candidates who won the local government elections in Punjab will join Pakistan People’s Party.