LAHORE (92 News) – Eidul Azha is being celebrated on Friday with religious fervor and renewed commitment to offer every sacrifice for the cause of the religion and progress and prosperity of the country.

Eid congregations were held throughout the country this morning where people in large number offered Eid prayers. Ulema in their sermons highlighted significance of Eidul Azha and philosophy of sacrifice.

Federal and provincial governments have chalked out elaborate security arrangements across the country on the occasion to ward off untoward incidents.

Civic authorities of different cities and towns have also made special arrangements for disposal of offals and other solid waste during three days of Eid.

In Karachi, President Mamnoon Hussain offered Eid prayers at State Guest house Karachi. Later, he mixed up with the people and exchanged greetings with them.

In Islamabad, the main congregation was held at Faisal Mosque where thousands of faithful offered Eid prayers. After offering Eid prayers, the faithful are now busy in slaughtering of their sacrificial animals, in remembrance of Sunnat-e Ibrahimi. 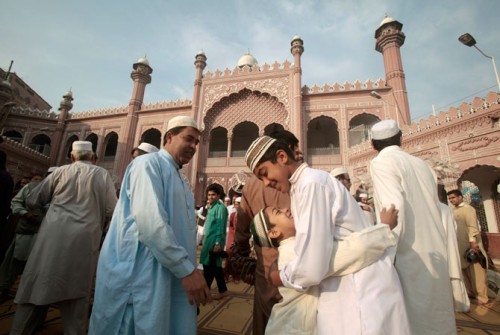