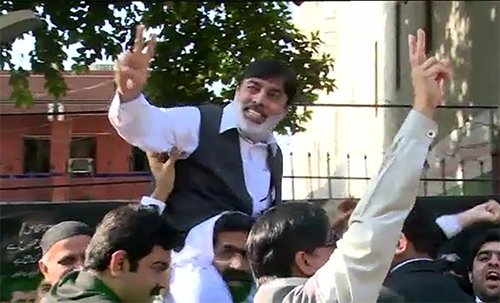 LAHORE (92 News) – An election tribunal has on Wednesday dismissed a plea filed by Pakistan Tehreek-e-Insaf (PTI) leader Hamid Zaman seeking disqualification of Pakistan Muslim League-Nawaz (PML-N) Member National Assembly (MNA) Riaz Malik in NA-118. The tribunal judge Muhammad Rashid Qamar, announcing a reserved verdict, said that the petitioner failed to prove his allegations of rigging in 2013 general elections. “The NADRA report noted around 12,000 votes as unverified while the lead taken by Riaz Malik was over 60,000 votes,” he said. After the ET’s verdict, PTI’s Hamid Zaman said that he had reservations over the tribunal from the start, adding that the verdict was written somewhere else. On this occasion, Malik Riaz said that this is the victory of PML-N and Prime Minister Nawaz Sharif, adding that PTI could not even prove a single allegation. Earlier, the activists of PTI and PML-N chanted slogans at each other, while huge contingent of police was also present. It is pertinent to mention here that the Pakistan Muslim League-Nawaz (PML-N) won the 2013 general election with a sizeable majority while Imran Khan‘s PTI came third, its best ever showing. The vote was largely seen as a genuine reflection of the electorate‘s will but irregularities are common in Pakistani elections. On PTI’s complaints, election tribunals had found massive irregularities and ordered re-election in NA-122 and NA-125 constituencies, both won by the PML-N candidates.