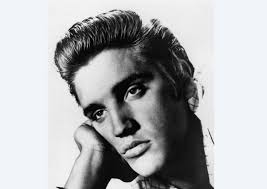 LONDON - King of rock and roll Elvis Presley topped the British album charts for a second week on Friday with his 12th UK Number 1. Nearly 40 years after his death, Elvis became the male solo artist with the most UK Number 1 albums last week with "If I Can Dream," a collection of his classics featuring orchestral reworkings by the Royal Philharmonic Orchestra. The album notched up over 88,600 combined chart sales, giving him the second-fastest selling album of the year behind Noel Gallagher's High Flying Birds' "Chasing Yesterday", the Official Charts Company said. New entries Little Mix’s "Get Weird" and Ellie Goulding's "Delirium" took second and third place in the album chart, pushing Rod Stewart's "Another Country" down from second to fourth place. There was another trip down memory lane this week with a deluxe reissue of the Beatles' album "1" entering at number five. In the singles charts, Adele was top for a third week with Britain's fastest-selling record of 2015 "Hello," which also topped Britain's weekly streaming chart with 4.7 million listens. Justin Bieber's "Sorry" was number two in the singles charts, followed by 2014 X Factor runner-up Fleur East with her debut single "Sax". -Reuters