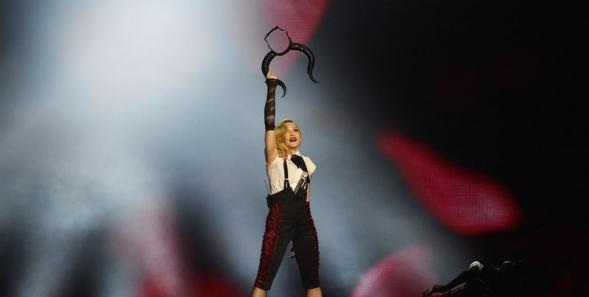 LOS ANGELES - "Empire," the Fox (FOXA.O) television hip-hop drama that became a hit in its first season, made its mark with music fans as the show's soundtrack debuted at No. 1 and beat Madonna for the top slot in the weekly US Billboard 200 album chart on Wednesday. The soundtrack scored 130,000 sales units, ahead of 121,000 units for Madonna's 13th studio album, the brand new "Rebel Heart," for the week ended March 15, according to figures from Nielsen SoundScan. Madonna sold more albums, 116,000, to the "Empire" soundtrack's 110,000. The Billboard 200 chart tallies album sales, song sales (10 songs equal one album) and streaming activity (1,500 streams equal one album). "Empire," the story of a hip-hop recording dynasty, is the first TV soundtrack to debut at No. 1 since 2010, when three albums from another Fox show, "Glee," arrived, Billboard said. The third spot on the chart was also for a debut album, country star Luke Bryan's "Spring Break ... Checkin' Out," which racked up 106,000 sales units. "1989" from Taylor Swift, the top-selling album of 2014, slipped from No. 3 to No. 5, and extended its run in the chart's top five since its release 20 weeks ago. Last week's chart-topper, pop singer Kelly Clarkson's 'Piece by Piece" dropped precipitously to No. 12 On the Digital Songs chart, which measures online song sales, Mark Ronson's and Bruno Mars' upbeat "Uptown Funk!" remained at No. 1 with 189,000 downloads in the past week. - Reuters