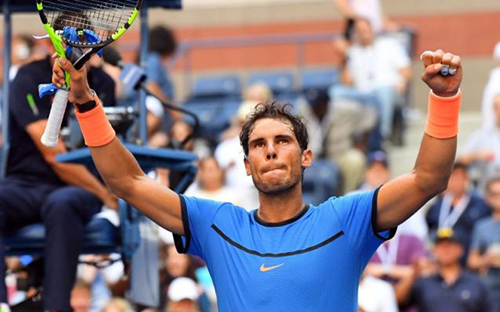 NEW YORK – Rafeal Nadal was worn out from his Rio Olympics exertions after emerging from an injury absence to win doubles gold, but the Spaniard perked back up with his trip to New York for the US Open. Nadal, who said his injured wrist is improving daily, beat Denis Istomin of Uzbekistan 6-1 6-4 6-2 in his first-round match on Monday's opening day of the year's last grand slam. "I think I played a solid match for a lot of time, then was a tough moment in the middle of the second set but I think I resisted well and very happy for the victory," Nadal said on court. "He's a really dangerous player, so I'm very happy to be through." Nadal said he is re-energized being in New York after feeling fatigued two weeks ago in Cincinnati, where he lost his second match after flying in from Rio. "The most important thing is I'm here in New York and that makes me happy," said Spain's 14-times grand slam winner, who could not continue through the French Open and also missed Wimbledon and the Toronto event due to his wrist injury. "Is not easy to go two months-and-a-half out of competition in the middle of the season without hitting a forehand," Nadal told reporters. "I need to have the confidence again with my wrist. That is coming ... every day (I) feel the wrist a little bit better. That's very important thing for me, the most important thing." Nadal, a twice champion here, already has a memento from this trip to Flushing Meadows - a video recording of him hitting at Arthur Ashe Stadium under the new retractable roof. "I have it recorded. I was the first player to hit the first ball under the roof covered. Important thing in the history of this tournament," he said.
"Thanks from the players' side, from the fans' side, from the television side, for everybody. Is so important to have a roof like this so then the program is never changed and people are not waiting for a rain delay."Beyond the obvious benefit of keeping a rain-hit tournament going, the support structure of the moveable roof has cut down on swirling winds that often perplexed players. "There is no wind," Nadal said. "One of these days that I was practicing in the center court, outside was very, very windy and in the center court was not wind at all. "Is a beautiful court." –REUTERS