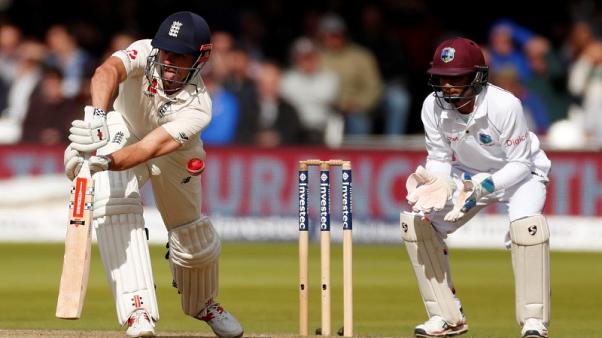 LONDON (Reuters) - England’s selectors name their squad on Wednesday for the Ashes series with the team in a surprising state of flux despite recent home series wins over South Africa and West Indies.

England experienced a mixture of crushing victories and heavy losses this summer, eventually winning out because they bat so deep and, in Ben Stokes and Moeen Ali, have two of their best-ever all-rounders.

But the top order seldom convinced with only opener Alastair Cook and captain Joe Root certain to play in the first test against Australia in Brisbane starting on Nov. 23.

Surrey’s Mark Stoneman is Cook’s most likely opening partner after playing in three tests against West Indies but much of the discussion will revolve around which batsmen deserve another chance to prove themselves in Australia.

The days when England could ink in proven performers like Jonathan Trott, Ian Bell and Kevin Pietersen in the middle order have long gone.

England coach Trevor Bayliss has said the squad is likely to include only players who have featured in the past 18 months, opening the way for a recall for Hampshire’s James Vince as England seek to fill their problem number three slot.

Vince is a natural shot-maker but did not feature this season after notching 212 runs at an average of 19 in his seven tests last year. Like Essex’s Tom Westley and Yorkshire’s Gary Ballance, who both batted at three this summer, Vince’s technique was questioned with concerns over his tendency to fence loosely at balls outside off-stump.

With Dawid Malan just doing enough to keep his place after averaging 23.62 in his five matches batting at number five, Ballance and Vince could both travel, with Keaton Jennings, Lancashire’s Haseeb Hameed, who broke his finger this month, and one-day specialist Alex Hales likely to miss out.

All three could feature for England’s second-string Lions squad, who will be in Australia this winter and supply ready-made replacements in the event of injury.

Stuart Broad and James Anderson, who recently took his 500th test wicket, will again spearhead the attack although neither is naturally suited to the extra pace and bounce of Australian pitches.

That could open the way for Mark Wood if he can stay fit, with Liam Plunkett, Craig Overton and Jake Ball all meriting discussion for a place alongside Chris Woakes.

Toby Roland-Jones, a surprising success this summer, will almost certainly miss out after injuring his back while his Middlesex team mate Steve Finn is an outsider, particularly after his struggles in Australia on England’s last tour in 2013.

Surrey’s Ben Foakes is the favourite to travel as back-up keeper to Bairstow, setting up the possibility of England picking Stokes, Woakes and Foakes in the same team.