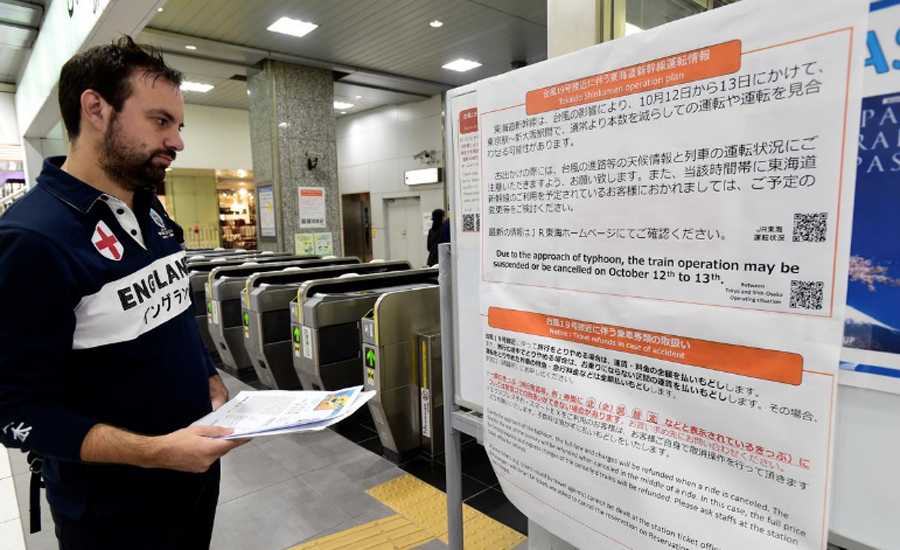 TOKYO (Reuters) – Rugby World Cup organisers have cancelled Saturday’s game between England and France as well as New Zealand’s match against Italy due to the risk from Typhoon Hagibis, while Sunday’s key game between hosts Japan and Scotland remains in doubt. The sport’s governing body World Rugby and tournament officials said at a news conference on Thursday the decision had been taken due to the disruption, particularly to transport systems, expected from the typhoon. The fierce tropical storm, predicted to be one of the most violent to hit the region in recent years, is expected to strike the Tokyo area this weekend. England and France have already booked a spot in the quarter-finals but the decision to cancel Italy’s match eliminates them from contention. A win over the All Blacks in Toyota could have taken the Italians through. New Zealand now top the group, ahead of South Africa. With hosts Japan and Scotland still locked in battle for a place in the knockout round any decision to cancel that game will have a huge impact on the final placings. That decision will be taken on the day of the game. Tournament rules state that any pool game that cannot be played is not rescheduled and instead is recorded as a 0-0 draw, giving each team two points, with no bonus points available. If Japan’s match in Yokohama is cancelled the hosts would go into the quarter-finals for the first time. World Rugby Chief Operating Officer and Tournament Director Alan Gilpin said: “This is a complex and dynamic situation which we have been monitoring extremely closely with the assistance of our weather information experts. “While making every possible effort to put in place a contingency plan that would enable all of Saturday’s matches to be played, it would be grossly irresponsible to leave teams, fans, volunteers and other tournament personnel exposed during what is predicted to be a severe typhoon.” He added that safety had to be the determining factor in these decisions. “We fully appreciate that England, France, New Zealand and Italy fans will be disappointed, but we trust they will appreciate that their safety must come first,” he said. “They will be entitled to a full refund on their match tickets.”