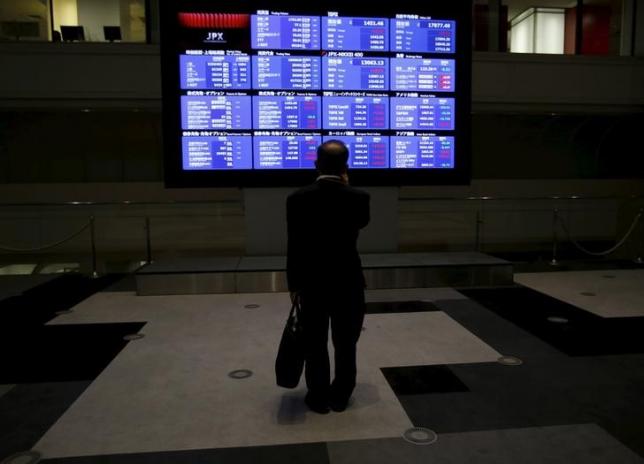 SYDNEY - The euro sagged to a seven-month trough on Monday as the prospect of more policy easing in Europe benefited the US dollar, while activity in Asian shares was crimped by a holiday in Japan. The strength of the dollar also combined with worries about Chinese demand to clobber commodity prices again, sending copper to its lowest in over six years. The head of the European Central Bank, Mario Draghi, last week offered the strongest hint yet that the ECB will unveil fresh stimulus measures at its Dec. 3 policy meeting. The contrast with the US Federal Reserve could not be more stark as it seems destined to lift rates in December for the first time in a decade, underpinning the dollar. The impact was clear in bond markets where yields on two-year German debt hit their lowest ever at negative 38 basis points, while US yields were at their highest since mid-2010. As a result the premium offered by US paper yawned out to 130 basis points, the fattest since 2006. The drag from negative yields pulled the euro down to $1.0605 EUR=, breaching the recent low of $1.0615. It also peeled off to 130.55 yen, again the lowest since April. Against a basket of currencies .DXY the dollar firmed 0.4 percent to 99.949, while also rising to 123.15 yen JPY=. Equities were quieter, with MSCI's broadest index of Asia-Pacific shares outside Japan off 0.2 percent. South Korea's main index .KS11 gained 0.7 percent while Australian stocks added 0.35 percent. Wall Street could find support from news of another blockbuster merger. Sources told Reuters that Pfizer Inc (PFE.N) was due to secure formal board approval for its acquisition of Allergan Plc (AGN.N) for more than $150 billion, creating the world's biggest drug maker. The EMINI contract on the S&P 500 was trading 0.1 percent firmer on Monday. The Dow .DJI had ended Friday up 0.51 percent, while the S&P 500 .SPX added 0.38 percent and the Nasdaq .IXIC 0.62 percent. The S&P 500 boasted its best week in almost a year, while Europe's main stock index enjoyed its strongest week in a month. "Interestingly, markets are treating the prospects of policy divergence reasonably well," said Jo Masters, a senior economist at Australia and New Zealand Bank. "But with two of the world’s major central banks about to head on divergent policy paths, can such smooth sailing continue over the months ahead?" they wondered. "Increased policy tension is likely to mean that volatility remains elevated." The strength of the dollar kept commodity prices under pressure. Gold was stuck at $1,070.50 an ounce having touched its lowest level in nearly six years. Copper slipped to a fresh six-and-a-half year low, as traders bet metals prices had further to fall given China's slowing factory demand. Oil prices sank again with US crude off 90 cents at $40.99 a barrel, while Brent lost 60 cents to $44.06. -Reuters