Europe hopes to stall migration at meeting with Africa 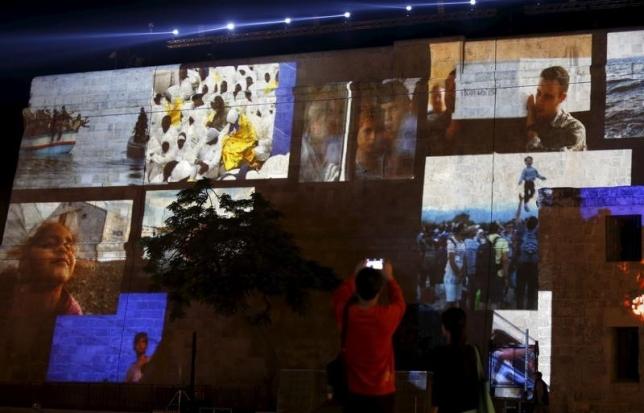 Europe hopes to stall migration at meeting with Africa

VALLETTA - Leaders of the European Union meet African counterparts on Malta on Wednesday, hoping pledges of cash and other aid can slow the flow of migrants crossing the Mediterranean from the world's poorest continent to wealthy Europe. The summit among the 16th-century fortifications at Valletta was conceived six months ago after the sinking of a boat making from Libya with the loss of over 800 lives forced embarrassed EU governments to abandon a hope that the sea would be their moat against human desperation and to step up naval rescue missions. That initially brought a surge in arrivals, mainly in Italy as well as Malta, the EU's smallest state. But numbers tailed off and Europe is gripped by new concerns further east: this year an unprecedented half a million, war refugees from Syria and economic migrants, have reached Greek islands from Turkey. That has left the Valletta meeting to focus on longer term problems -- such as helping Africa create jobs or face global warming that is enlarging the desert -- and on deals to send home hundreds of thousands of Africans already in Europe. Negotiations with Turkey, temporary home to over 2 million Syrians, on slowing departures to Greece will be at the centre of further talks among the EU leaders alone on Thursday. They will also hold fraught discussions on how measures they have agreed since April have still to take effect, as a continued flow of migrants via the Balkans strains the system of open borders among European states close to breaking point. The summit chair, European Council President Donald Tusk, told the Maltese parliament on Tuesday that an expected doubling of Africa's population by 2050 and the strain that refugees from conflict in the Middle East were placing on Europeans' will to keep their borders open to each other made action essential. "The precondition for conducting our own European migration policy is restoring effective control over our external borders," said the former Polish premier, noting Malta's role in the clash of Christian and Muslim powers for control of the Mediterranean 500 years ago and calling for partnership with African and other neighbours to control today's flows of people. AFRICAN CONCERNS African governments have expressed concern at suggestions that Europe could sharply reduce immigration from the continent, cutting a vital source of remittance income for their economies. EU officials say there will be assurances that legal migration, for students notably but also for seasonal labour, could be increased in return for help to cut illegal migration. A priority for many in Europe is more cooperation from African states in recognising and accepting the return of their citizens who do not meet criteria for asylum. Many destroy identity papers and evade deportation because it is unclear where they are from or African states will not take them back. Some leaders in the EU, the biggest aid donor to Africa, warn that development funds are at risk if Africans do not do more to discourage their citizens from leaving. Official policy, however, is to focus on offering "more for more", more aid for more help, rather than on cutting back what is already paid. One source of embarrassment for Europeans is a failure of EU states to make good on pledges made on their behalf by the bloc's executive Commission, which proposes they match over $3 billion (£1.99 billion) in additional aid promised from the central EU budget. So far, just 520 million euros of a 2.8-billion euro pledge have been put up by member states, although Commission officials expect more public donations to be made by leaders in Valletta. -Reuters