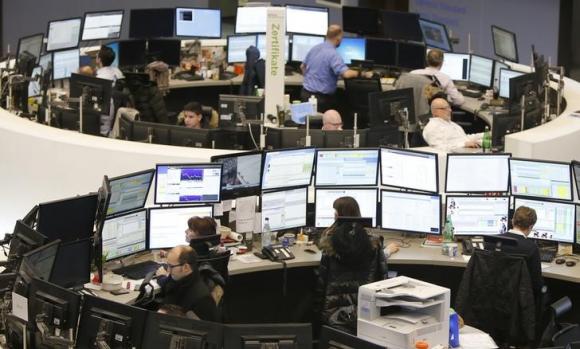 LONDON (Reuters) - European shares clung to seven-year highs on Monday, lifted by merger activity in the telecoms sector, while Asian stocks edged up after China cut interest rates at the weekend. The dollar hit an 11-year high against a basket of currencies, partly as a result of a weaker Chinese yuan and on growing prospects of a rise in interest rates from the US Federal Reserve. The pan-European FTSEurofirst 300 stocks index .FTEU3 was up 0.1 percent. French media group Vivendi (VIV.PA) said on Friday it had agreed to sell its remaining stake in telecoms company Numericable-SFR (NUME.PA) to Altice (ATCE.AS), whose shares soared nearly 10 percent on Monday. Upbeat European factory activity data also helped. German manufacturing activity expanded further in February as new order rose, according to Markit's final purchasing manager's index (PMI) for the month. Italy's Markit/ADACI PMI showed the first expansion in activity for five months. However, French activity slowed further in February. "European markets remain buoyant, not just because of low yields but it seems that finally economic activity and confidence are ticking up from the lows," said Lex Van Dam, hedge-fund manager at Hampstead Capital. China, which posted its slowest growth in decades in 2014, cut on Saturday its benchmark lending and deposit rates.. A survey on Monday showed China's HSBC/Markit PMI climbed to 50.7 in February - its strongest since July - from 49.7 in January. An official survey released on Sunday showed factory sector contracted for a second straight month in February. The rate cut helped push Australian shares .AXJO 0.5 percent higher as shares in resources companies, which have prospered on the back of Chinese demand rose. The Shanghai Composite Index .SSEC closed up 0.8 percent However, the impact in the rest of Asia was muted. MSCI's broadest index of Asia-Pacific shares outside Japan .MIAPJ0000PUS dipped 0.1 percent. Tokyo's Nikkei .N225 closed up 0.2 percent as the yen lost ground against the dollar. The Australian dollar, often seen as a proxy for Chinese growth, initially rose as high as $0.7850 before pulling back to $0.7768, down 0.6 percent on the day. The yuan fell to its lowest against the US dollar since October 2012 CNY=CFXS at 6.2740 and last traded at 6.2730 to the greenback. The US currency was up 0.3 percent at 119.83 yen JPY= and the euro was down 0.1 percent at $1.1177, having earlier hit a one-month low of $1.1160 EUR=. "I would expect the euro to be the big news story this week," said Neil Mellor, a strategist with Bank of New York Mellon in London. "There was the sense after the resolution of the Greek situation last week that the market was ready to sell the euro again and we have seen a grind higher since." Against a basket of currencies, the dollar hit a peak not seen since September 2003 .DXY before retreating slightly to trade up 0.1 percent on the day. ROUBLE WEAKER Russia's rouble weakened to 62.3 to the dollar, on the lower oil price and after the murder of prominent Kremlin critic Boris Nemtsov. "This tragic incident can serve as an additional argument to consider new sanctions against Russia - with which we are already blanketed," said Andrei Dirgin from Alfa-Forex. Brent crude LCOc1 fell 0.7 percent, or 45 cents, to $62.13 a barrel. A rebound in oil prices in February may have slowed production cuts, though prospects of Chinese demand limited losses on Monday. Expectations of demand from China lifted gold prices to a new two-week high. Spot gold XAU= was last at $1,218.60 an ounce.