ISLAMABAD (92 News) – The European Union has once against demanded the Government of Pakistan to reinstate the moratorium on death penalty, calling the move a requirement under the European Union’s GSP+ Regulation.

In a statement issued on Thursday, the EU said that nearly 150 executions have been carried out across Pakistan since a six-year moratorium on executions was lifted following a dead terror attack at an army-run school in Peshawar in December last year. “Initially, executions were resumed for terrorism offences only but later the federal government completely reinstated capital punishment for all offences that entail the death-penalty,” it said.

The statement said that the EU is opposed to capital punishment in all cases and has consistently called for its universal abolition. “We call on Pakistan to reinstitute the moratorium and to respect fully all of its international obligations.”

Pakistan lifted the de-facto moratorium on death penalty on December 17 last year, a day after Taliban gunmen attacked a school in Peshawar killing 134 students and 19 adults.The attack believed to be the worst the country had witnessed in recent years claimed lives of more than 150 persons, mostly schoolchildren. 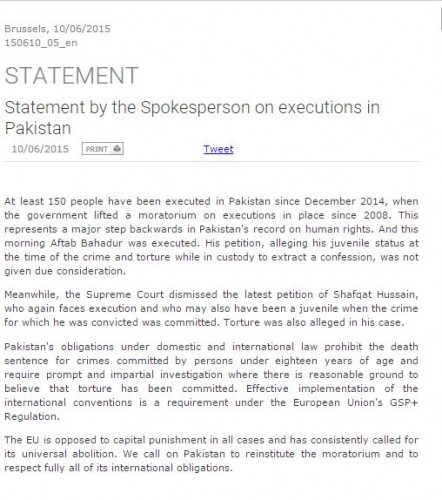