A letter has been issued to the MNA under the Rule 21 of the National Assembly’s code of conduct on the instructions of Speaker Asad Qaiser. “Your conduct caused hurdle in smooth holding of the house proceedings and interrupted the session,” the letter to Shahid Khaqan read.

“By impeding the house proceedings you also ridiculed the office of the Speaker,” according to the letter.

The letter further said that Shahid Khaqan Abbasi is required to tender apology and explain his position within seven days of receipt of the letter and if reply is not received within such time, it will be presumed that the PML-N leader has no explanation to offer. 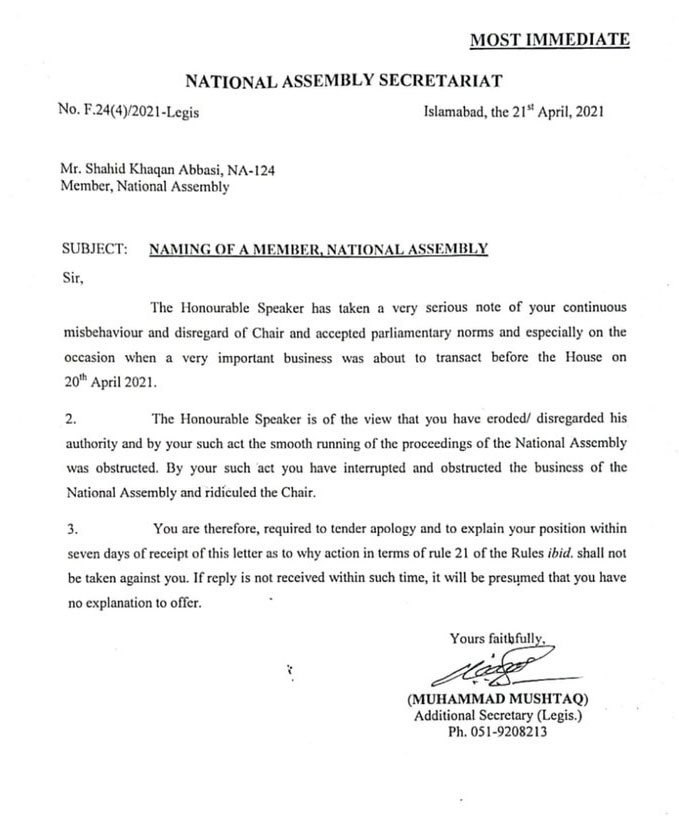 Earlier on April 20, Harsh words were exchanged between National Assembly (NA) Speaker Asad Qaiser and Shahid Khaqan Abbasi as the PML-N senior leader made threat to hit with a shoe to the NA speaker.

Both the leaders exchanged these hot words during the special session of the Parliament where the government presented a resolution to debate the expulsion of the French ambassador.

The opposition was angry that the government had not taken parliament into confidence on the current situation. After the resolution was adopted rather hurriedly, Khaqan Abbasi stood up to speak. He came right in front of the NA speaker's dais.

"Unfortunately, this resolution is not enough. “You have tabled a resolution, we should be given time to go through it. We want a unanimous resolution to be passed”. “You have no shame,” he cried. "Mind your language," warned the NA speaker. "You always behave like this."

The PML-N leader used unparliamentary language and made threats to Asad Qaiser, saying, "I’ll hit you with a shoe."

The NA speaker relied, "I’ll do the same to you. Stay within your limits. Go to your seat...!"

Resolution On Expulsion Of French Ambassador Tabled In NA

A resolution demanding the expulsion of France’s ambassador from the country has been tabled in the National Assembly.

The resolution tabled in the house by PTI member Amjad Khan stated that this House condemns the blasphemous acts committed by a French magazine and further condemns the French president for promoting such acts.

It called for a debate in the National Assembly on the expulsion of France ambassador and raising the matter with Muslim countries to devise a joint strategy.

The resolution stated that France and other European countries should be apprised regarding the gravity of the matters relating to the blasphemy acts besides also raising the matter at international forums.

Speaking on the resolution, Religious Affairs Minister Pir Noorul Haq Qadri said that this house is the guardian of the sanctity of the Holy Prophet (PBUH) and Prime Minister Imran Khan has advocated the issue at the international forums.

Other speakers including Ahsan Iqbal, Shahid Khaqan Abbasi, Asad Umar and others also spoke on the occasion and extended their complete support for the resolution.

Speaker Asad Qaiser later adjourned the proceedings of the house for Friday and directed the members from both sides of the aisle to devise a joint strategy on the resolution.

The decision from the PML-N and JUI-F was contrary to that of the PPP that has decided to stay away from the session.

The PPP has boycotted the National Assembly session scheduled to debate on French ambassador resolution. The decision was tweeted by Bilawal Bhutto hours after Interior Minister Sheikh Rasheed announced that the government will present a resolution in the assembly seeking the expulsion of the French ambassador.

“Now PTI wants to hide behind NA. It’s your mess PM, clean up or go home,” he added.

On the other hand, PML-N and JUI-F have announced that their parliamentarians will attend the NA session.

Bilawal Bhutto says PTI's entire budget is based on lies