Pakistan has not hosted top-level international cricket – barring five limited over matches against Zimbabwe in 2015 – since the Sri Lankan team bus was attacked by terrorists in March 2009, killing eight people and injuring seven players and staff.

Australians George Bailey, Ben Cutting and Tim Paine were part of the arrival after the squad had assembled for a training camp in Dubai.

The World XI, will play three Twenty20 internationals from Tuesday, arrived around 2:00am Pakistan time (2100 GMT) with air surveillance and dozens of police vans in attendance as the team was whisked to their hotel.

Both the hotel and stadium will be cordoned off with 9,000 police and paramilitary staff deployed during the next five days. 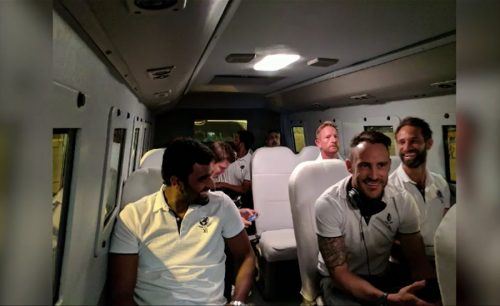 The Independence Cup matches will be broadcast on PTV in Pakistan and fans across the border in India can watch the series on DSport after the new premium sports TV channel launched by Discovery Communications India acquired the exclusive broadcast rights for that country.